In post 19.9, I wrote that light and other forms of electromagnetic radiation, are propagated as waves. What is the evidence for this statement? 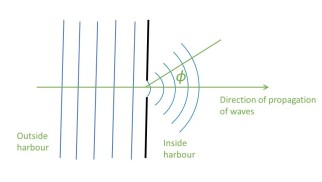 In the picture above, water waves (blue) on the sea, meet the entrance to a harbour that is protected by walls (black). The walls prevent the waves from entering the harbour – except through the entrance.

But the waves do not pass through in a straight line, because they scatter the water in all directions – as a result of the orderly progression of the waves being disturbed by the walls. So, new waves are propagated by the water in the harbour entrance – this is sometimes called Huygen’s principle. As a result, we see the pattern of waves shown in the picture above. However, at high values of the scattering angle, φ, shown in the picture the waves cancel out because of interference (post 18.10).

This combination of scattering and interference is characteristic of wave motion and is called diffraction. 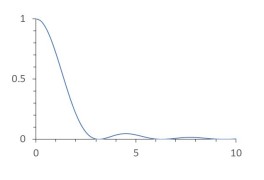 If we look at water waves more carefully, we may see that their amplitude depends on the value of the scattering angle. The angular dependence of the intensity of the waves (post 19.19) is shown in the graph above; the intensity, whose maximum value is arbitrarily defined to be 1, is plotted against Ka. Here a is half the width of the entrance to the harbour and K is the modulus of the scattering vector, that is related to φ by

This result is derived in appendix 2 where λ is the wavelength of the waves (post 18.10). The graph was plotted using equation 3, of appendix 1. (Since K is a multiple of 2π divided by a length (the wavelength), Ka is measured in radians – see post 17.11).

How is this related to the behaviour of light?

If you shine a laser pointer through a thin slit, in an opaque screen, you will see the same result. You need to use a laser because its waves are continuously produced in phase; other sources produce light in bursts that do not have a constant phase relationship with each other. We say that a laser is a coherent light source; the other sources are incoherent.

If you try this experiment for yourself, be careful – laser pointers are more dangerous than many people think. You must never point the laser beam at someone’s eyes. You should not use a laser that is more powerful than a laser pointer. More information on laser safety is given at https://www.ehs.uci.edu/programs/radiation/Laser%20Pointer%20Safety%20Factsheet.pdf.

So, why does diffraction occur?

Let’s look at the picture above. O is at the centre of the entrance to a harbour or a slit in an opaque screen. P is at the edge of the entrance, or the slit. PQ is perpendicular to the line, from O, that makes an angle φ with the direction of propagation. A wave scattered from P, though an angle φ, has a path length (post 18.10), the length of the red line, of (a/2)sinφ with respect to a wave scattered by O. If

where is a positive or negative integer, then constructive interference will occur (post 18.10) – the peaks and troughs of the two waves will reinforce each other. But if

So the scattered waves will have an intensity that depends on the scattering angle. This is what we see with water waves and with light. This is strong evidence for the idea that light is propagated as waves.

In this appendix, I derive an expression for the dependence of scattered light intensity on the magnitude, K, of the scattering vector. For information on vectors see post 17.2; for information on their dot product see appendix 2 of post 17.13.

Remember (post 18.10) that we can represent a wave, at an instant in time, by

where A is the amplitude of the wave, λ is its wavelength, k = 1/λ and x is a distance along the direction of propagation of the wave.

The picture above shows the direction of waves incident at and scattered by a point O, at the centre of the slit, and a point P’, whose position is given by the vector r, which lies along the width of the slit. The path difference (post 18.10) between these waves is r.(-κ0) + r.κφ.

(Although, I’ve used the simple example when κ0 and r are perpendicular, to keep the explanations in the main post simple, this will not always be the case.) The vector K = (κφ – κ0) is sometimes called the scattering vector. The modulus of K is given by

So, the wave scattered by an element of the slit at P, whose width is δr can be represented, in amplitude and phase by

Here C is a constant that depends on the ability of the medium in the slit to scatter waves and e is defined in post 18.15. The factor δr appears because the wider the scattering medium, the greater the scattering amplitude. The right-hand side of this equation follows because r is fixed and r.K is the projection of K on r (see appendix 2 of post 17.13).

Now the total wave scattered by the medium in the slit is given by the sum of the waves scattered by all the elements, like that at P. This sum is the integral (post 17.19)

Here the total width of the slit is 2a. Evaluating this integral gives the result

The final step comes from Euler’s relation (post 18.17). We can write this result in the form

where C’ is a constant, for a given value of a. We can rewrite this result as

where I0 is the intensity of the wave that is not scattered (see appendix 3), that is the wave for which K = 0.

You might wonder what represents the phase of the scattered wave in the expression for ψ above; this is explained in appendix 4.

The purpose of this appendix is to show that

The final step comes from the result of appendix 4 in post 16.50. Then

Now we’ll take the direction of propagation of the waves (the green arrow in the first picture of this post) to define the unit vector i so that the orthogonal unit vector j points vertically upwards (parallel to the thick black line). Everything you need to know about vectors to follow this appendix is explained in post 17.2.

From the first picture in appendix 1, with the explanation in the paragraph immediately below it, we can write

Then K, the modulus of K, is given by

This result can be written as

The modulus of ψ represents the amplitude of the wave scattered through an angle given by the modulus of the scattering vector K (see post 18.7).

If you read through appendix 1, carefully, you will see that this result arises because the origin of our coordinate system was placed at the centre of this slit. Placing the origin at this point makes the system symmetric and simplifies the definition of the phases of the scattered waves.