I wrote about exponential growth and decay in posts 16.5 and 16.6; I want to return to this topic again to introduce some ideas that I will use in later posts.

Let’s invent a number called e (it was really invented by Jacob Bernoulli in 1683); we will define it raised to the power x (post 18.1) by

The value of e is given by putting x = 1 into our definition of ex. The result is

Like π, in post 17.11, this series goes on forever. But each term that is added to the series is smaller than the one before; we say that the series converges. So, we can calculate the value of e, to whatever, precision we require, as shown in the table below; more information on tables like this appears in post 17.11. 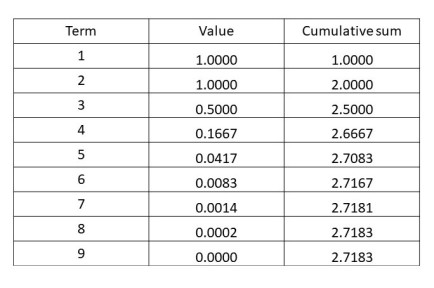 We can see that, if we want to find a value of e to four decimal places, any term after the eighth has no effect (we say the series has converged) and that the required value is 2.7183.

Now let’s think about the number of something increasing with time, t, according to the equation

Here n0 is the initial number of the thing (when t = 0) and n is the number at the time represented by t; k is a constant. How long does it take the number of things to double? We will call this time t2 and will calculate its value by putting n = 2n0 in the equation above. Then

From the definition of a logarithm (post 18.3) we can then write that

So, the time for the number of things to double is constant. In post 16.5 we saw that exponential growth occurs when the number of something doubles in a constant period of time.

To explore exponential growth further, I’m going to differentiate ex with respect to x, using the ideas explained in post 17.4. In this post, I proved that d(x1)/dx = 1 = x0 and that d(x2)/dx = 2x = 2x1. These results can be generalised to d(xm)/dx = mxm-1, where m is a constant; the proof involves using the binomial theorem (a topic I haven’t covered in this blog) and isn’t easy.

Applying this result to equation 1 gives

So differentiating ex gives ex.  This means that the rate at which ex increases, as x increases is equal to its current value – another way of looking at exponential growth.

To look at exponential growth yet another way, I’m going to use the idea that

This result is proved in the appendix; for an explanation of logex, see post 18.3.

Here, k is a constant; note that, if k is negative, equation 4 represents exponential decay (post 16.6). The graph below is identical to the graph at the beginning of this post except that k = -10, instead of 10. 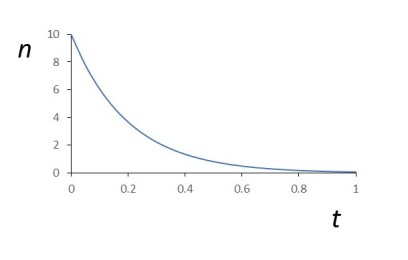 Dividing both sides of equation 4 by n gives

Integrating both sides of the result, with respect to time (see post 17.19), gives

since k is a constant (post 17.19). Evaluating these integrals (noting the result given in equation 4) gives

Substituting this value for C into the equation above gives

For an explanation of the final step, see post 18.3. From the definition of a logarithm to the base e (post 18.3), we can express this result as

Multiplying both sides of this result by n0 gives equation 2. So, equations 2 and 4 are equivalent and both could be used as definitions of exponential growth.

The important points in this post are given by the previous sentence and the ideas expressed in equations 1 and 3.

The purpose of this appendix is to prove equation 3.

d(ey)/dy = ey and dx/dx = 1. Substituting these results into the previous equation gives

Dividing both sides of this equation by ey gives