The picture below represents an electromagnetic wave, at an instant in time.

It is important not to think of the electric and magnetic fields as being independent entities – they are both a consequence of a charge oscillating at a distance. You can’t have one without the other. Notice that the vectors representing the electric and magnetic fields (post 17.24) are perpendicular to each other and to the direction of propagation of the wave – an electromagnetic wave is an example of a transverse wave (post 18.10). In the picture above, each vector oscillates in a fixed plane. If these planes remain the same, the wave is said to be polarised.

It is also important to realise that, unlike a water wave (post 18.10) or a wave on a stretched string (post 18.12) an electromagnetic space does not require oscillation of a physical object to propagate. This means that it can propagate through empty space. Before the twentieth century, people found this idea puzzling, so they had to invent a mysterious substance called the ether (or aether) that enabled the waves to propagate.

The table below gives the frequencies of the different forms of electromagnetic radiation. If you are not sure what 1019, and so on, mean – see post 18.2. The unit of frequency is the hertz (Hz) defined in post 16.14.

The region between 0.43 and 0.75 × 1014 Hz, is shown in more detail below with the colours that we see at different frequencies. It also shows the corresponding wavelengths calculated from the value of c, using the equation in the second paragraph (above); here distances are measured in nanometers (nm, post 16.12). 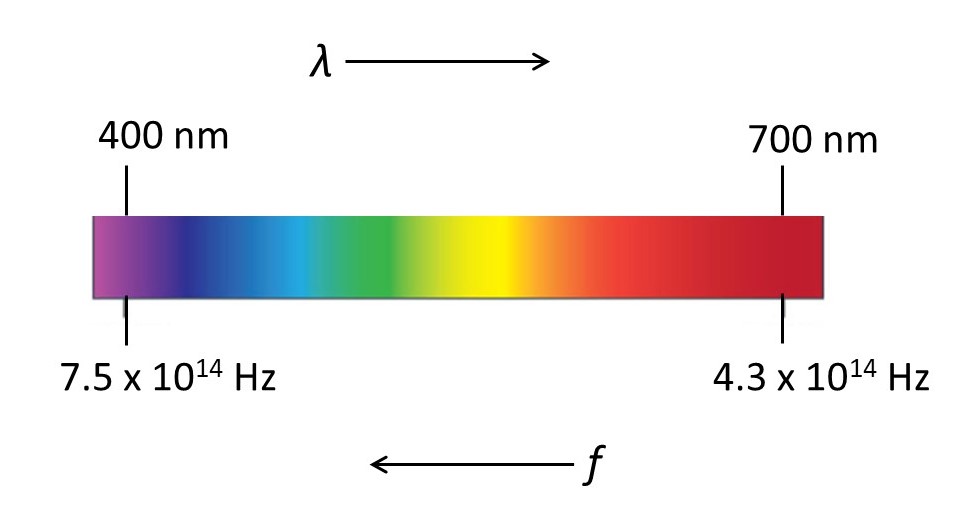 If you’ve read this post to the end, you may think that I have told you some things without really explaining them. This is because its sometimes easier to know a bit about something before we explore it further (see post 17.25). So, I hope to return to some of this stuff in later posts.