Let’s suppose a string or wire is fixed at A, is stretched tight by a force T (a tensile force, post 16.49) and is then clamped at B. This wire is shown in black. Now let’s displace the centre of the wire, downwards, so that the wire is bent into the lower red shape. If we then remove the displacing force the wire spontaneously moves upwards – it stored the work done in displacing it as potential energy; it then uses this potential energy to recoil – converting the kinetic energy into potential energy (see post 16.21 for more information on potential and kinetic energy). The wire behaves like a spring (post 16.49). However, just like the spring in post 18.11, it does not simply return to its original position – it oscillates. (Further information on why it oscillates is given in the appendix of post 18.11.) The wire moves from its lower red position, through its lower blue, lower green and black positions and then upwards, through its upper blue and upper green to its upper red position; it then moves downwards, in the reverse order. In the absence of damping (post 18.9), the oscillation will continue indefinitely.

The wire is then a simple harmonic oscillator vibrating with its natural frequency (post 18.8).

Notice also that the wire is moving up and down like a wave (post 18.10). But, unlike the water waves we met in post 18.10, it does not travel along the wire. The wave on the wire does not move along a direction of propagation – it is a standing wave. The ends A and B are fixed and so cannot move up and down – they are called nodes. The centre of the wire shows the maximum displacement – it is called an anti-node.

Let’s suppose the length AB of the wire is L. According to the picture, in post 18.10, defining wavelength, λ, only half a wave-length of the standing wave appears on the wire. So

Also according to post 18.10, the frequency of the wave is given by

where v is its speed. Note that f is the natural frequency of the vibrating wire.

In the appendix, we see that the speed of the wave is

where σ is the mass per unit length (measured in kg.m-1 in the SI system, post 16.13) of the wire. So σ is a bit like density, ρ, (post 16.44) except that it’s a mass divided by a length instead of a mass divided by a volume. (You can work out that, for a wire with a circular cross-section of radius r, that σ = πr2ρ.) If we substitute the expression for v into the expression for f, we obtain the result that the wire vibrates with a frequency

By now you will have guessed (if you didn’t know already) that the frequency of a vibrating string produces a sound with a required pitch – to make music. So why does the same musical note (a sound with a particular pitch or frequency) sound different when played on a violin, a guitar and a piano?

The vibrating wire is forced to have nodes at A and B because it is fixed at these positions. However, it can have antinodes in positions other than its centre. The pictures above show some more waves that can form on the wire when it is fixed at A and B. In the picture they are all shown with the same amplitude. But this won’t necessarily be the case. We expect the red wave to have the larger amplitude if we displace the wire nearer its centre. You can see that, for the blue wave, λ = L. The wavelengths, and therefore the frequencies, of the other waves can be related to L, as shown in the table below.

So, the general expressions for the allowed wavelengths and frequencies is

When n = 1, the string vibrates with its fundamental frequency; the other frequencies, that are related to it by having different values of the integer n, are its harmonics.

In this post, we have seen how a vibrating wire (a simple harmonic oscillator) can be considered as a form of wave. This is an example of the link between simple harmonic oscillators and waves (post 18.11) and helps us to understand something about how stringed musical instruments work. However, we have yet to explore the nature of sound itself – the subject of my next post.

Let’s think about a short segment of the wire, of length ΔL, at the peak of the wave. If we make ΔL sufficiently small, it approximates to the arc of the circle, radius r, shown in the picture above. 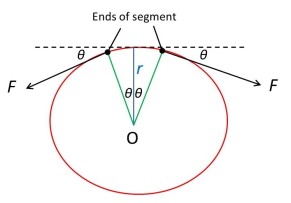 If we measure θ in radians

The tension in the wire acts at both ends of the segment. It makes an angle of θ with the tangent. (You need to look at the picture to convince yourself of this, noting that the tangent is perpendicular to the blue radius). The horizontal components (post 16.50) of this tension act in opposite directions and cancel each other out. The vertical components are Tsinθ (post 16.50) and act at both sides of the wire. So the total vertical force, that acts towards the centre of the circle, is given by

The second step arises because the sine of a small angle is approximately equal to its value measured in radians; this is proved, by different methods, in appendix 1 of post 18.6 (noting that 1 – cos2θ = sin2θ) and in the appendix of post 18.7.

If we consider the segment to have a mass m and to be moving in a circular path of radius r, with speed v, this force provides the centripetal force (post 17.13) to maintain the motion, with the result that

Taking the square root of both sides of this equation gives the required result.