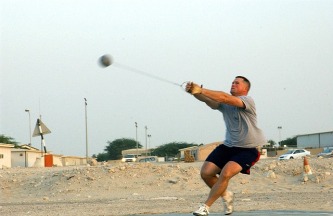 The man in the picture is practising “throwing the hammer”. In this event, the participant swings a spherical “hammer” using a cable, as shown in the picture, several times around his/her body. So the hammer goes round in a circle, with the person swinging it at the centre. When he/she let’s go of the cable, the hammer flies along a tangent of the circle – in a straight line. The object of the event is to throw the hammer as far as possible.

In this rest of this blog, we shall think about the centripetal force in more detail.

In the picture above, an object, like the hammer, is going round in a circle, centre at O, with a constant angular speed (see post 17.12) ω. The object starts at point P and at time t later it is at P’. From the definition of angular speed, the angle POP’ is ωt. We shall define the position of P’, relative to O, by the vector (see post 17.2) r.

If we use the line OP to define an X-axis, a Y-axis is generated at right angles to OP in the direction shown (see post 17.2). From the definition of sine and cosine (see post 16.50), the components of r in these directions are given by r.cos(ωt) and r.sin(ωt). (The dot “.” between r and sin or cos simply means “multiplied by” – just like the × sign.)

So we can write

as explained in post 17.2, where i and j are unit vector in the X and Y directions.

Note that v is the translational velocity of P, defined in post 17.4, and not the angular velocity, defined in post 17.12. This expression for v also shows that its direction always makes an angle of 90o (π/2 rad) with r (see Appendix part 2). As a result, if the centripetal force is removed, P will move off in a tangent to the circle; the tangent is a line perpendicular to the radius that touches the circle at a single point.

Similarly, the acceleration of P (see post 17.4) is given by

Comparison of the expressions for r and a shows that

This means that an object at P’ that is going round a circle whose centre is at O, must be undergoing a translational acceleration along P’O – that is, it is accelerating towards the centre of the circle.

Now let’s suppose that the object has a constant mass m. According to post 16.13, it must be experiencing a force of

The force F represents the centripetal force required to keep the object moving in a circle. It is directed in the opposite direction to r (as shown by the minus sign in the equation) and so acts towards the centre of the circle. The concept of centripetal force is essential for understanding why objects, like satellites, move in a circular path. It is very important not to confuse centripetal and centrifugal forces; centrifugal forces are forces observed in a rotating frame of reference (see post 16.9) and will be the subject of a future post.

I’m not going to prove this result (see part 1 of the Appendix of post 16.50 to find out more about mathematical proof); I’ll just show that it looks reasonable.

Remember, that when we differentiate something, we find the slope of a line at a point on a curve (post 17.4). 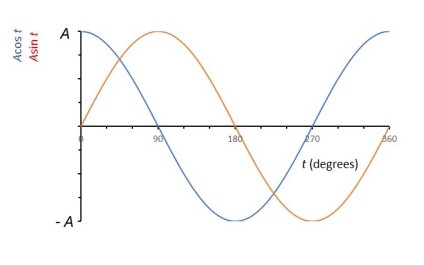 In the graph above, Asin(t) is plotted (in red) against t. Now let’s consider the slope of this line at certain values of t and compare this slope with the value of Acos(t) plotted (in blue) on the same graph.

We can see that the slope of Asin(t) is equal to the value of Acos(t).

We will define φ (the Greek letter “phi”) as

where A and ω are constants, and u as

So we can write φ as

Differentiation of φ with respect to u gives

according to the previous section of this Appendix.

It seems reasonable to suppose that

In the limit as δt tends to zero (see post 17.4), this supposition becomes

We have already calculated dφ/du. Using the results of part 2 of the Appendix to post 17.4, gives

You just need to follow the same steps in the first two sections of this Appendix but instead start with Acos(ωt) instead of ωAsin(ωt).

There are two ways in which we can multiply two vectors v and r; the first, called the dot product and written v.r, generates a scalar result and the second, called the cross product and written v × r, generates a vector result. (Note that there is only one way of multiplying something by a scalar, so then, for example, a.b means the same as a × b and a.b means the same as a × b; a scalar is a number with a value or magnitude but has no associated direction – post 16.50.)

The dot product of v and r is defined by

where θ is the angle between v and r. Here v and r have their usual meanings of the moduli of v and r, respectively.

Above we saw that

Remember that the cosine of zero is 1 and that the cosine of 90o (π/4 rad) is zero (see post 16.50). Now let’s think about the three vectors i, j, and k which have the magnitude equal to the number one and are mutually perpendicular (the angle between any two of them is 90o). It then follows, from the definition of v.r, that

The angle between each of the vectors i, j, and k and itself must be zero, so that

So we can also write v.r in the form