In post 18.6, we saw that the sine and cosine of the angle ϑ, measured in radians (post 17.11) could also be expressed as the series

Now let’s think about the number eiϑ, where i represents the square root of -1, as discussed in post 18.16; this means that, by definition, i2 = -1. It follows, from equation 1, that

This result is called “Euler’s relation”, named after the Swiss mathematician Leonhard Euler (his last name is pronounced like the English word “oiler” https://forvo.com/word/leonhard_euler/#de) who lived from 1707 to 1783.

According to post 18.16, we can represent cosϑ + isinϑ and, therefore, eiϑ, in two dimensions by the diagram below.

The picture below is copied from post 18.11; it represents a point, initially at P moving around a circle, of radius a, with an angular speed (post 17.12) ω. 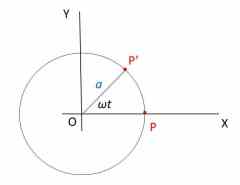 After a time t has elapsed, it reaches P’. From the previous paragraph, we can see that, at any given time t, we can represent the position of P’ by aeiωt. Sometimes this is written aexp(iωt) to avoid writing so much information in the superscript iωt. This method of representing the position of an object going round in a circle is an alternative to the trigonometric representation given in post 18.11.

could be used to specify the position of a simple harmonic oscillator. Also, the expression

In post 18.11, we saw that the sine and cosine forms were solutions of a differential equation. If you think about it, you will see that if acos(ωt) and asin(ωt) are solutions of the differential equation then nacos(ωt) + masin(ωt), where m and n are any numbers, must be a solution too. Putting n = 1 and m = i, we can see why aeiωt is a solution too. 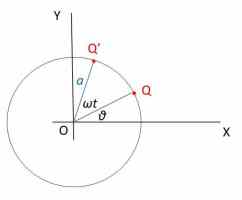 In this picture, there is a phase difference, ϑ, between Q and Q’. So our general expression for the position of an object going round in a circle, a simple harmonic oscillator or a wave has the form aexpi(ωt + ϑ) where ϑ is a phase term.

So a very abstract idea, like the square root of minus – 1, enables us to reduce the number of equations we need to describe everyday observations.