This post introduces the mathematical concept of integration that makes it much easier to understand many scientific topics. But, if you really don’t like mathematics, you can ignore this post and still understand most parts of most other posts. To keep it simple, I’m going to consider an object moving in a straight line.

According to post 17.4, the average speed of an object that moves a distance Δr in a time of Δt is given by

From this definition, we can calculate the distance travelled from the average speed as

which means the result of differentiating distance, r, with respect to time, t; this represents the slope of a graph of r plotted against t at an instant in time (post 17.4).

How can we calculate the distance travelled using values of v and t? 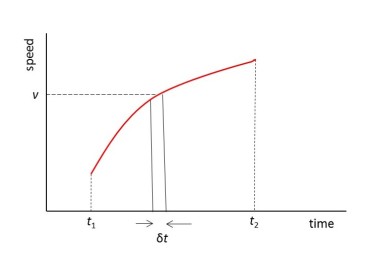 The picture above shows a graph of speed plotted against time; firstly, we will look at what is happening in a very short interval of time δt. In this time interval, the graph is approximately a straight line; the nearer δt approaches zero, the better the approximation (post 17.4).

So, during this very short time period, the distance travelled is given by

Suppose we want to calculate the total distance, r, travelled in between an initial time t1 and a final time t2. This distance is given approximately by the sum of all the little increments in distance δr in each time incremental time interval δt during the interval from t1 to t2. By convention we write this sum as

where the “Σ” sign means the summation, or “adding up” of what is happening in all the incremental times. The smaller the value of δt, the better this approximation becomes. If you have read post 17.8, you may realise that we used this idea to calculate the submerged cross-sectional area of the hull of a ship. Here the summation represents the area under the curve between times t1 and t2.

The approximation becomes exact in the limit as δt tends to zero (see post 17.4). We represent this exact limiting result as

and is called an indefinite integral.

We can represent the relationship between distance and speed by the diagrams below.

They show that integration reverses the effect of differentiation.

This reverse or inverse relationship shows us how we can evaluate an integral. In the pictures below, m, n and p are constants and the results for differentiation come from post 17.4.

When we perform integration, p can be any constant because when we differentiate any constant the result is zero. This constant is called a constant of integration. When we are using integration to solve a real problem, we need to use our knowledge of the physical system to find the right value to use for p; we shall see how to do this in the next post.

According to post 17.4, acceleration is the rate of change of velocity. This result can be written as

So, to calculate velocity from acceleration, we calculate the integral

This may seem very abstract. In the next post, we will apply these ideas to a simple example – I hope this will show how they can be applied to solve real problems.