In post 16.50, we saw that the effect of a force depends on its direction, as well as how big it is – force is a vector. So, if we add a force of 5 N to another force of 5 N, the result can be anything between 0 (when they act in opposite directions) to 10 N (when they act in the same direction). If you’ve forgotten, force is measured in newtons (abbreviated to N – see post 16.13).

This means that we can’t add forces (vectors) in the same way as we add ordinary numbers (scalars – see post 16.50). To avoid confusion, we need to make it clear that something is a vector – we do this by writing it in bold, for example F. In handwriting, we usually underline vectors, for example F. You may have been taught to add vectors by drawing triangles or parallelograms. This is very tedious; fortunately, vector algebra was invented to make adding vectors much easier. 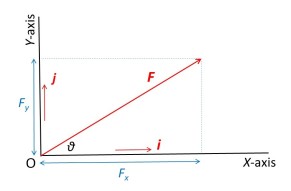 To define a vector, we need to define an X-axis direction (like the horizontal axis of a graph – see appendix 2 of post 16.50). A Y-axis is then automatically defined at 90o to the X-axis (like the vertical axis of a graph – see appendix 2 of post 16.50), where anti-clockwise angles are defined to be positive. In the picture above, the length of the vector representing the force F is F; this length is called the magnitude or the modulus of F. The projection of F on the X-axis is Fx and its projection on the Y-axis is Fy; Fx and Fy are called the components of F and are scalars. According to Pythagoras’ theorem (post 16.50, appendix 1)

F makes an angle θ with the X-axis. From the definition of the cosine and sine of an angle (appendix 3 of post 16.50)

(The final step is just like dividing by a number but the number is represented by the symbol F; it’s the same idea as that if 20 items cost 20 dollars, 1 item costs 1 dollar.) The brackets in this equation mean that we calculate whatever is in the brackets first. In appendix 5 of post 16.50, we defined the tangent of an angle by tan θ = sin θ/cos θ.

So we can write equation (4) in the form tan θ = (Fy/Fx). This means that θ is the angle whose tangent is given by (Fy/Fx). The previous statement can be written as the equation

that enables us to calculate the direction of a vector from its components. We shall see how this is used soon. (Sometimes arctan is written as tan-1).

Now let’s try adding two vectors together. To do this we will use the vectors

We can add forces in the i-direction and forces in the j-direction independently because i and j are at right angles to each other – so what happens in one direction is independent of what happens in the other direction. Adding i components and j components is then just like adding apples and oranges – the answer is a number of apples and a number of oranges. When we do this, the resultant vector R is given by

The values of the cosines and sines of the angles can be found at:

When we do the arithmetic, we get the answer that

How do I know the value of arctan(1.26)? I looked it up at: http://www.rapidtables.com/calc/math/Arctan_Calculator.htm.

You could also use a scientific calculator or a spreadsheet, like Excel; if you use Excel it will give you an answer measured in radians (post 16.50) – divide by 3.14159 and multiply by 180 to get an answer in degrees.

If vector algebra seems a bit strange – don’t worry. I once met someone who had studied maths at a good British university for a year and didn’t understand it. But, once you get the idea, it makes dealing with vectors much easier than the geometrical constructions that are often used. I will use it, in a later post, to explain the idea of centripetal force. When I was first taught this, without using vector algebra, I found it almost impossible to understand. But I hope you will find it easy!