The density of something is the mass of a sample of it divided by the volume of the sample (post 16.44). So, we might expect that, when we heat a solid, its density will increase; this is because when we heat a solid its atoms (post 16.27), molecules (post 16.30) or ions (post 16.39) move further apart (post 16.37). Then the volume will increase although the mass stays the same (there is still the same quantity of stuff present) – so the density decreases.

We also expect density to decrease when a solid melts. Now the atoms, molecules or ions are free to move and are no longer tightly packed in a crystal (post 16.37) – so we expect them to move further apart and the volume to increase. When we heat the resulting liquid, we expect its volume to increase (for the same reason explained in the previous paragraph) – see posts 16.35 and 16.37 to find out more background detail. 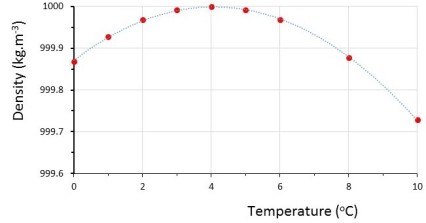 Water is an exception. At 0oC, ice has a density of 915 kg.m-3 but liquid water has density of 999 kg.m-3 at the same temperature. Even more surprising, when the temperature of water increases from 0oC to about 4oC, its density increases – so its volume decreases. At temperatures above about 4oC, it starts to behave as expected. This behaviour is shown in the graph above.

So, in ice, the water molecules pack together so that the ends of the covalent bonds (hydrogen nuclei) point towards the lone pairs (on the oxygen atom), because their unlike charges attract (post 16.25). Remember that the bonds and lone pairs point towards the corners of a tetrahedron. As a result, water molecules pack together as shown in the picture above (left-hand side), in which the atoms in the O-H bond of one water molecule and the oxygen atom of another water molecule lie in a straight line. (Why a straight line? Because the lone pair defines a line from the oxygen nucleus to the corner of a tetrahedron; it then pulls the hydrogen atom in the H-O bonds towards it – so the two oxygen atoms and the hydrogen atom lie in a straight line.) This packing arrangement is stable, because of the attraction between the unlike electrical charges but leaves a lot of space between the water molecules in the crystal. So ice has a low density. It is possible to see channels running through the crystal structure. If we look in the direction down columns of water molecules (right-hand side) can see these channels more clearly – they are marked with white circles.

So why is water less dense than ice, in the temperature range shown in the graph? Molecules in liquid water have more kinetic energy than those in ice and so are more free to move (posts 16.35 and 16.37). They can then move into the spaces that we saw in the ice crystal. As a result, liquid water (right up to its boiling point of 100oC) occupies a smaller volume than the same mass of ice and so has a lower density. This doesn’t mean that molecules in liquid water don’t interact with each other, as described above, just that these interactions are not sufficiently strong to prevent molecules from moving away from each other – so that liquid water flows.

Is this just a scientific curiosity? Not if you’re a fish! It means that ice floats on water, performing a similar function for a fish as the walls of our houses do for us. Water at 4oC sinks below colder water, that risks being frozen if the temperature drops – fish can live in this warmer water where the risk of being trapped by ice formation is reduced.

We saw that, in ice, hydrogen atoms covalently bonded to an oxygen atom are attracted to oxygen atoms in other water molecules. This attraction is associated with specific directions because the lone pairs and covalent bonds of the oxygen atoms point towards the corners of a tetrahedron. The attraction occurs because the oxygen atom has a small negative electric charge and the hydrogen atom has a small positive electric charge. This attraction is strengthened because the hydrogen nucleus, in one water molecule, tends to attract the lone pair electrons in the oxygen atom of the other molecule. As a result, the separation of charge in a water molecule is increased – so strengthening the attraction. This type of attraction can occur between a hydrogen atom, covalently bonded to an oxygen, nitrogen or fluorine atom, and an oxygen, nitrogen or fluorine atom to which it is not covalently bonded. As we have already seen, it acts in a specific direction, so that the three atoms involved lie in a straight line. This type of interaction has about 1/10 th the strength of a covalent bond and is called a hydrogen bond. Hydrogen bonds are important for molecular recognition in all sorts of biological processes including storage and copying of genetic information.

So, a simple observation about the anomalous behaviour of water helps us to understand how fish can survive a freezing winter and the molecular interactions that enable genetic information to be passed from one generation to the next.