We all have everyday experience of solids, liquids and gases.

We can hit things with solids but may need to be careful that they don’t break.

We need to keep liquids in a cup, jar, bottle or similar container. Liquids differ from solids in three ways: (1) you can’t hit something with a liquid, (2) we can pour liquids out of a container and (2) the idea of something breaking makes sense for solids but not for liquids.

If we try to keep a gas in a cup or jar, or any container that is not tightly sealed, it will simply escape. Unlike a liquid it can spread itself upwards as well as sideways and downwards.

Since both liquids and gases can flow, they are sometimes called fluids.

How can we make these distinctions more formal? Solids are completely enclosed by their own surfaces. The surface that something makes for itself is sometimes called a free surface. Liquids have only one free surface; the surface at the top. Gases have no free surfaces; they expand to fill the volume of a sealed container.

Adding heat to a solid can change it into a liquid; adding heat to a liquid can change it into a gas. For example, heat changes ice (solid) into water (liquid) and water (liquid) into steam (gas). Remember that heat is simply kinetic energy of motion of atoms or molecules (post 16.35). When we start to heat ice, it expands as its molecules (H2O, see post 16.30) move further apart. If we add sufficient heat for the ice to reach 0oC it turns into a liquid – we say that it melts. Now the water molecules can move around – so that we can pour liquid water but we can’t pour ice. We call 0oC the melting point of ice. The heat required to melt 1 kg of ice, at 0oC, is called the latent heat of melting (or the latent heat of fusion). If we keep adding heat to the water so that its temperature reaches 100oC, it will turn into steam. We call 100oC the boiling point of water. The heat required to turn 1 kg of water into steam, at 100oC, is called the latent heat of vaporisation. (A “vapour” is just another word for a “gas”).

However, our experience tells us that it is not always easy to decide whether something is a solid or a liquid. Some creams can form free surfaces but you can’t hit something with a lump of cream! Things that show this kind of behaviour are sometimes called soft solids.

How can we explain the behaviour of simple solids, liquids and gases? 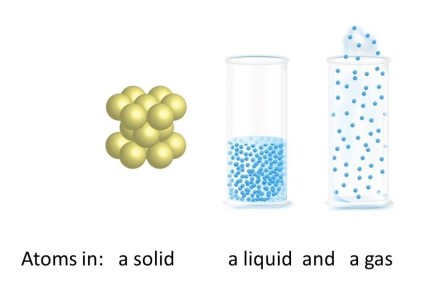 We start by assuming that atoms tend to attract each other – the force (see post 16.13) of attraction is called a van der Waals’ force. So atoms or molecules will tend to stick together to form solids that, therefore, define their own free surfaces. If we add heat, their kinetic energy of motion means that they will vibrate and the solid expands (see post 16.35). If we add enough heat, their kinetic energy will become much higher, the van der Waals forces will not be strong enough to hold them together, and they are able to flow – so the solid turns into a liquid. So “latent heat” is the energy (post 16.21) that does the work (post 16.20) to overcome the attractive van der Waals’ forces. If we add even more heat, the kinetic energy of the atoms or molecules becomes even higher and they can jump away from the others and so form a gas.

In many solids, the atoms or molecules are packed together in a regularly repeating three-dimensional pattern. This regular structure is called a crystal. Many textbooks create the impression that all solids are crystalline. There are two reasons for this. One: metals were the first solids that physicists studied in detail because of their economic importance at the time; most metals are crystalline solids. Two: it is easier to develop mathematical theories for crystalline solids because of their regular structures. You may think that a lump of metal doesn’t look crystalline, like a diamond. This is because lumps of metal are usually lots of little crystals, that are too small to see, stuck together; they are polycrystalline.

However, not all solids are crystalline. Hard waxes are definitely solid at room temperature but their molecules are not packed together regularly in a crystalline structure.

Some books state that glass is not a solid but a “super-cooled liquid” because its atoms are not packed together in a crystal lattice. I think this is a silly idea because glass appears to be like any other solid. However, it is not crystalline; instead its atoms are arranged more like those in a liquid. So solids like glass are usually called amorphous solids (“amorphous” simply means they have no regular structure) or glasses to distinguish them from crystalline solids. I think people who call glass a liquid are confusing what we really see (a solid) with our simple explanations of what we see (solids have regular structure but liquids are amorphous).

A further complication is that even amorphous solids and liquids do not have truely random structures. This is because their atoms exclude each other from the space they occupy. As a result, each atom influences the positions of the atoms that surround it.