In post 16.29, we saw that electrons occupy atomic energy levels to minimise their overall energy. However, some electron configurations are more stable (they have a lower overall energy) than others. The evidence for this statement is that some atoms are much less likely to form molecules or ions in chemical reactions (subjects of this and planned later posts) than others.

Atoms in which there are no energy levels with less than two electrons are more stable. This statement needs some further explanation. Because the 2px, 2py and 2pz levels all have the same energy, the most stable situation is when they are all filled with electrons.

So, the atoms we met in post 16.29 would be more stable if they have the electron configurations of helium or neon.

How can they achieve these electron configurations? By sharing electrons with other atoms!

According to post 16.29, an oxygen atom needs two extra electrons to attain the electron configuration of neon. It can achieve this by sharing two pairs of electrons (in its 2py and 2pz energy levels). So, oxygen can form two covalent bonds, -O-. Two oxygen atoms can then be held together by two chemical bonds to form an oxygen molecule O=O or O2.

The same reasoning should lead you to the conclusion that fluorine can form one covalent bond and can form a fluorine molecule F2.

The formation of chemical bonds by a carbon atom is a bit more difficult to understand. It is worthwhile for carbon to absorb energy to promote one of the two electrons in its 2s level into the   level. It then has one electron in each of four energy levels (2s, 2px, 2py and 2pz). These electrons can each be shared with another electron from another atom to form four covalent bonds. For example it can form carbon dioxide O=C=O or CO2, with two oxygen atoms, or methane CH4 with four hydrogen atoms.

We can use these ideas to explain the shapes of molecules. Each of the four covalent bonds in methane is a shared pair of electrons. Since electrons all have a negative charge, the four bonds will tend to repel each other to move as far apart as possible (see post 16.25), while still joining the carbon atom to four hydrogen atoms. In a three-dimensional space, they do this by pointing towards the four corners of a regular tetrahedron, so they make an angle of 109.5o with each other. This tetrahedron has the carbon atom at its centre and the four oxygen atoms at its corners, as shown by the molecular model below.

An alternative type of model for the methane molecule, called a space–filling model, because it attempts to show the space occupied by the atoms is shown below. 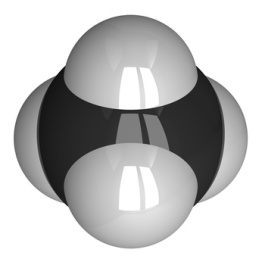 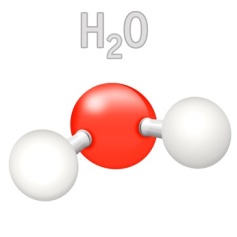 But covalent bonds can’t explain all the molecules that exist. We might expect that nitrogen atoms would combine with oxygen atoms to form the O=N-N=O or N2O2 molecule. But it also forms NO and NO2, as well as other oxides. People who are interested in pollution from diesel engines sometimes refer to mixture sof NO and NO2 as NOx.

In order to explain the formation of many of these other molecules, we need to consider a pair of electrons shared between two atoms where one of the atoms contributes both of the electrons in the pair. A bond of this kind is called a coordination bond.