I suggest that you read post 16.25 on electrical charge before you read this.

The ancient Greek philosopher Democritus believed that you couldn’t keep breaking stuff into smaller and smaller bits – there must be a limit. He called these smallest bits of stuff atoms. I’m not convinced by the logic of his argument (see Xeno’s paradox in post 16.6) but the idea of the atom proved to be very useful when it was developed by the scientist John Dalton in Manchester, England in 1805. The existence of atoms could explain many experimental observations (see posts 16.2 and 16.3) and their structure was extensively investigated, especially in England in Manchester and Cambridge (although one of the most important early experiments on the electron was performed by R. A. Millikan at the University of Chicago).

In post 16.6 we saw that an atom consisted of a central core, called its nucleus. The nucleus can contain two types of particle: the neutron and the proton. Neutrons and protons have almost the same mass (1.67 × 10-27 kg). (See post 16.7 if you’re not sure about this way of writing numbers.) Protons have a positive charge (1.60 × 10-19 C) but neutrons have no charge. 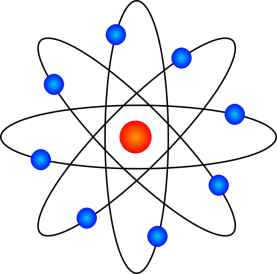 The nucleus is surrounded by electrons. They have a mass that is negligible compared to the mass of a proton or a neutron (9.11 × 10-31 kg). The charge on an electron is equal but opposite to the charge on a proton (-1.60 × 10-19 C). Since an atom is electrically neutral, it has the same number of electrons as it has neutrons.

The element chlorine occurs naturally as a mixture of isotopes: with A = 35 (75.8%) and A = 37 (24.2%). So, in a sample of naturally occurring chlorine the average value of A is (35 × 0.758) + (37 × 0.242) = 35.5. We say that chlorine has a relative atomic mass of 35.5. This mass is measured relative to 1/12 times the mass of a carbon nucleus (A =12); this is almost exactly the same as the mass of a hydrogen nucleus (A = 1). Because most elements occur naturally as a mixture of isotopes, their relative atomic masses are not usually whole numbers. Unfortunately (see post 16.17) you will sometimes see relative atomic mass called “atomic weight”. Because it’s just the number of hydrogen nuclei that have the same mass, it does not have units of mass (kg – see posts 16.12 and 16.13 for more information on units) – it’s just a number. However, you will sometimes see the phrase atomic mass unit (amu) used to make it clear that this is not a mass measured in kg. Biochemists tend to use the dalton instead of the amu – it’s the same thing!