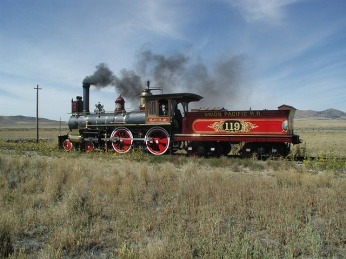 Let’s think about two identical steam engines; each contains water at the same temperature (100oC) at which water boils. The only difference is that one boiler is full and the other is only half full. Which of the two engines is capable of doing most work? The one with the full boiler – it will still be doing work after the boiler of the other is empty. Heat is a form of energy and energy is simply the ability to do work (see post 16.21). So the full boiler contains more energy, and so more heat, than the half-full boiler.

Although one boiler contains more heat than the other, both have the same temperature. So what is temperature? It measures whether something is “hot” or “cold”. We can feel the difference between hot things and cold things. But that doesn’t really explain the concept of temperature.

Temperature measures the direction in which heat flows spontaneously. Heat doesn’t flow spontaneously from an object at low temperature to an object at high temperature. A hot drink will get colder before you drink it – it won’t get hotter unless you add heat to it. The second sentence, in this paragraph, is one way of stating the second law of thermodynamics (see post 16.21 to find out about the first law of thermodynamics). Of course, heat can be made to flow from cold things to hot things but we need to use energy to make this happen – it’s not spontaneous. Refrigerators and heat pumps both use electrical energy to make heat flow from cold things to hot things. But they don’t break the second law of thermodynamics because this flow is not spontaneous, it requires the expenditure of energy.

When we drop a lump of ice into boiling water, heat spontaneously flows from the boiling water into the ice and melts it. Melting ice produces cold water. But heat continues to flow spontaneously from the hot water to the colder water until we have water that is at a constant temperature.

Let’s suppose that a quantity of heat ΔQ flows into an object with a temperature, T, measured on the Kelvin scale. The symbol Δ here is not essential but it is used to show we mean “some heat” not just “heat” in general – in the same way as we used this symbol in post 16.12. We now define the increase in entropy within the object to be ΔQ/T.

Now suppose that we have two objects completely isolated from the rest of the world. We call anything isolated in this way (so that no energy can flow in or out and no work can be done on it or by it) a closed system. Of course, we can never have a truly closed system but it is an abstract idea that helps us to understand how things work. Object 1 is at a temperature T1 and object 2 is at a temperature T2; both temperatures are measured on the Kelvin scale. If heat ΔQ flows spontaneously from object 1 to object 2, we know that T1 is greater than T2; we can write this as the inequality T1 > T2. When the heat flows, the entropy of object 1 changes by -ΔQ/T1 and the entropy change within object 2 is +ΔQ/T2. So the overall change in the entropy of our closed system is ΔS = (ΔQ/T2) – (ΔQ/T1). Since T1 > T2, (ΔQ/T2) > (ΔQ/T1) because dividing ΔQ by a big number gives a smaller result than dividing it by a small number.

This means that the change in entropy, ΔS, must be positive and so the entropy of the system increases.

So the entropy of a closed system spontaneously increases. This is another way of stating the second law of thermodynamics. However, we have seen that a closed system is an abstract idea that can never exist. So it has been suggested that the second law can be stated as: the entropy of the universe tends to increase. This may well be true but is not very useful because we don’t solve a scientific problem by thinking of everything that is happening in the universe at the same time!