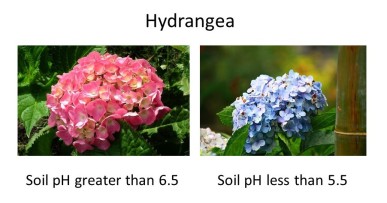 To calculate pH values, we need to understand more about the pH scale, for measuring acidity and alkalinity, that was in introduced in post 18.1. The definition of pH is that

This result explains why the pH values of acids are positive numbers whose values are less than 7.

However, when some acid molecules dissolve in water, not all the molecules break down to give H+ ions (acetic acid, post 17.49, is an example). Calculating the pH values of these acids is a bit more complicated and is explained in appendix 1.

From the definition of pH, the pH of 0.10 M sodium hydroxide solution is 13. You may also notice that no solution can have a pH value of greater than 14.

In post 17.49, we saw that a few acetic acid molecules broke down in water as shown below.

We could denote this schematically as

We also saw that the acid dissociation constant was defined by

Some NH3 molecules take up an H+ ion from a water molecule, to form an NH4+ ion, leaving behind an OH– ion, when they dissolve in water (post 16.40).

According to post 17.50, the base dissociation constant for this reaction is

As in appendix 1, we have a quadratic equation to solve but, because the value of Kb is so low, we can assume that 0.1 – x ≈ 0.1, with the result that

We have seen that, for a solution in water,

has two solutions given by

where the symbol + means “plus or minus”. Both these solutions are mathematically correct but often only one will be relevant to the problem you wish to solve. So you need to use your judgement when interpreting the mathematical result.

For example, let’s solve the equation

Can you think how to solve this equation without using the formula?

Below I prove what I have written in the first paragraph.

subtracting c from both sides gives

and dividing both sides by a gives

Now we need to notice that

This means that equation 1 can be written as

Taking squares roots of both sides of this equation gives