In post 16.16 we met the concept of a gravitational field. Are there other kinds of fields? Yes – two that we encounter in everyday life are the electric field and the magnetic field. Both arise because some objects can have a property called electrical charge. 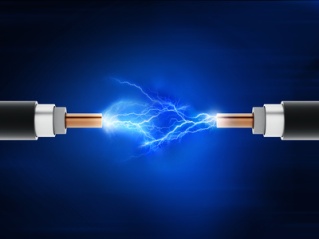 Electrical charge (sometimes simply called charge) is measured in units called coulombs (abbreviated to C). We are not very familiar with stationary charges in everyday life, but whenever we switch on anything electrical we see the effects of them moving – an electrical current. We measure current by the number of coulombs that flow in one second. You might then expect that current would be measured in coulombs per second (C/s or C.s-1 – see posts 16.12 and 16.13 for more explanation about units) but this unit has a special name – the amp (abbreviated to A). However, charges can also be stationary – a capacitor in an electric circuit is a device for storing charge.

If another charge, q’, is placed in this field, it experiences a force of F = q’E.

There can be negative, as well as positive, charges. If q’ has a negative value, F will act in the opposite direction and so q’ is attracted to q.

If you have been reading this post carefully, you will have noticed that we don’t yet have a definition of the coulomb (the unit of charge). This is because of the official definition of the amp (the unit of current). Because a moving charge (a current) exerts a force on another moving charge (another current), two wires conducting an electric current will exert a force on each other. If the force between two very long (strictly speaking infinite) parallel wires, of negligible diameter, that are a distance of 1 m apart, in a vacuum, is 2 × 10-7 N, then is current flowing in the wires is defined to be 1 A. The coulomb is then the charge that flows when there is a current of 1 A flowing for 1 s.