Let’s think about a chlorine atom. It has an atomic number Z = 17 (post 16.27), so that its 3s energy level contains the maximum number (2) of electrons and its 3p energy levels contain 5 electrons (see post 16.29) – so that they can accommodate one further electron, in order to attain a stable electron configuration (see post 16.30). It could share this electron with another atom to form a covalent bond (post 16.30).

Alternatively, the chlorine atom can steal the additional electron from another atom; it then has the maximum number (6) electrons in its 3p energy levels. Because it now has a total of 18 electrons (2 in the 1s level, 2 in the 2s level, 6 in the 2p levels, 2 in the 3s level and 8 in the 2p levels) but only 17 protons in its nucleus, it has an overall negative charge, equal to the charge on the extra electron. We call this negatively charged chlorine atom a chloride ion and represent it as Cl–; negatively charged ions are sometimes called anions. 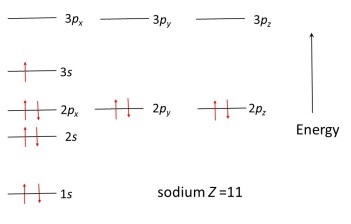 Where can the chlorine atom steal an electron from? As an example, it can steal it from a sodium atom. Sodium has an atomic number Z = 11. It has 11 electrons (2 in the 1s level, 2 in the 2s level, 6 in the 2p level and 1 in the 3s level). It can achieve a stable electron configuration (in which all levels contain their maximum number of electrons, by losing the electron in the 3s level. It still has 11 protons in its nucleus but now has only 10 electrons. As a result, it has an overall positive charge, equal and opposite to the charge on a chlorine ion. We call this positively charged sodium atom a sodium ion and represent it by Na+; positively charged ions are sometimes called cations.

So, when sodium reacts with chlorine, it forms an equal number of sodium ions and chloride ions. Because the number of sodium ions (positively charged) equals the number of chloride ions (negatively charged), the overall result has no net charge – it is electrically neutral. The resulting compound is called sodium chloride – its everyday name is “salt”. So salt doesn’t contain molecules – instead it is a mixture of Na+ and Cl– ions. However, it is sometimes convenient to represent it as NaCl but we must be careful to remember that it is not a molecule but a mixture of ions – it is called an ionic compound.

Many ionic compounds are soluble in water. This is because water has a high relative permittivity (dielectric constant) ε0 = 80 (see post 16.25). As a result, the force of attraction between positive and negative ions is only 1/80 times what it would be in a vacuum (see post 16.25). At room temperature, this may not be enough to overcome the kinetic energy of molecular motion (heat, post 16.35) from disrupting the crystal so that the ions are free to move in the liquid water. When this happens, we say that the compound has dissolved – the result is called a solution.

Oxygen has atomic number Z = 8. Its electron configuration is shown above (post 16.29). It can fill its 2p energy levels by stealing two electrons to form the oxide ion, O2-. So calcium reacts with oxygen to form equal numbers of calcium and oxide ions – calcium oxide CaO.

But, remember that all the compounds discussed here (NaCl, CaCl2, CaO, Fe2O3 and FeO) do not contain molecules – they are mixtures of ions.