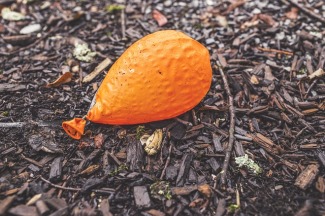 Suppose you blow air into a balloon until it is partly inflated. If you put the balloon somewhere warmer (at a higher temperature), it will inflate itself even more. When you put the balloon somewhere warmer, heat spontaneously flows into it (see post 16.34). So adding heat to the balloon makes the air occupy a larger volume. If it is difficult to put a metal peg in a hole in an object, you can just cool the peg; it gets smaller and fits the hole more easily. So taking heat from something can make it smaller.

How can we explain these observations? What would make atoms occupy more space? (The objects I am describing could be atoms, for example if the balloon contained helium, or molecules, if it contained air – a mixture of oxygen, nitrogen and some other gases. However, it doesn’t affect the argument, so I’ll use “atoms” to cover both atoms and molecules.) The simplest explanation (that also explains a lot of other observations as well) is that adding heat is the same thing as making the atoms move further apart. Remember that heat is a form of energy (see post 16.21). Energy associated with things moving is called kinetic energy (see post 16.21).

So heat appears to be kinetic energy of atomic or molecular motion.

When ice first melts in hot water, it forms cold water; eventually the cold water gets hotter and the hot water gets colder – until all the water is at the same temperature. We can explain this using the second law of thermodynamics; we consider our mixture of hot and cold water to be a closed system whose entropy will spontaneously increase (see post 16.34). The laws of thermodynamics were discovered long before scientists like Maxwell (see posts 16.11 and 16.15) and Boltzmann (see post 16.22) started to understand heat in terms of atomic or molecular motion.

However, now that we recognize that heat is kinetic energy of atoms and molecules, we can explore the nature of entropy a bit further. Initially, in the example of the last paragraph, cold water and hot water were separate. Both lots of water moving molecules, because both contain some heat. As the molecules move randomly about, how likely is it that the cold-water molecules will remain together and the hot-water molecules will remain together? Very unlikely indeed! They will get mixed up because mixed-up arrangements (of which there are very many) are much more probable than segregated arrangements (of which there are very few). When we put a thermometer in the mixture, we will measure an average temperature for the molecules.

So the tendency of heat to spontaneously flow from high temperatures to low temperatures, which is the same as saying for the entropy of the system to increase, depends on probability. If there are W different ways in which the molecules can be arranged, Boltzmann defined entropy as

So objects contain molecules that are constantly moving about (at temperatures above 0 K, see post 16.34). Why don’t we ever see an object spontaneously jump upwards because all its molecules happen to be moving upwards together at the same time?

Now remember that normal sized lumps of stuff contain about 1027 molecules (see post 16.6); to get some idea how big this number is, see post 16.6. The probability that all molecules will move “up” together is then so small that, for all practical purposes, it is zero. So we can make predictions about the behaviour of such large numbers of molecules with near certainty.

If all the molecules in a lump of stuff move “up”, W = 1 (because there is only one way in which this can be achieved). So the entropy is given by

The symbol “≈” means “approximately equal to”. So Srand is very small but it’s much bigger than Sup.

So objects don’t jump spontaneously upwards because this cooperative molecular movement is highly improbable. Which is another way of saying that it would be associated with a spontaneous decrease in entropy – so it would break the second law of thermodynamics.