In post 20.27 we met optical isomers – molecules that have thee same atoms joined to each other but are not identical to their mirror images.

Isomerism exists because there are different ways of writing chemical formulae. If we represent the formula of a molecule as C2H6O it could represent either of the molecules shown below.

The other type of isomerism is stereo isomerism. There are two types of stereo isomerism. In post 16.47 we saw that unsaturated fats, that contain double bonds between their carbon atoms, can exist in cis and trans forms, as shown above. They are different because, although molecules can rotate about their single C-C bonds, they can’t rotate about their double C=C bonds (post 16.47). Some cis unsaturated fats are an essential component of our diets but trans unsaturated fats are associated with coronary heart disease, cardiovascular disease, stroke and type 2 diabetes (post 16.47). Two molecules that differ only in existing as cis and trans forms are called geometric isomers and demonstrate geometric isomerism.

Geometric isomerism is not confined to molecules with C=C double bonds. The pictures above shows the structure of the anti-cancer drug cis platin. The four bonds to the platinum atom (Pt) point towards the corners of a square (not towards the corners of a tetrahedron) – so the molecule is flat. As a result, cis platin and trans platin are different molecules. Only cis platin kills cancer cells: trans platin doesn’t. So the two molecules have different properties. The arrows represent coordination bonds (posts 16.30 and 16.40). 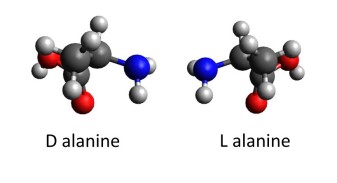 The other form of stereo isomerism is optical isomerism. The picture above shows the structures of the optical isomers D alanine and L alanine (post 20.27). In posts 20.27 and 20.30, I have used drawings to represent the three-dimensional shapes of these molecules. But we can modify the way in which we draw their molecular formulae to show the difference between the two optical isomers.

The picture at the beginning of this post shows how isomers are classified.