Forces change the state of motion of an object (post 16.13). But, in post 16.50 on springs, we saw that forces could also change the dimensions of objects. A spring can be stretched by a force (a tensile force) or compressed by a force (a compressive force). This effect is not restricted to springs – a force can change the dimensions of any object, although for a very stiff object this change may be difficult to detect. Forces can also change the shape of an object, for example when a pot is made from clay by pushing and pulling it into the desired shape.

Let’s think about pulling a long, thin wire. The wire gets longer (and thinner) but the change in shape is negligible. So, the force acting on the wire can be considered to stretch it without changing its shape – it is (almost) subject to pure tension.

Now suppose we wanted to compare the behaviour of a steel wire and a copper wire. We could compare stiffness of the two wires by comparing values of k. But if we wanted to compare the stiffness of the materials steel and copper, we would have a problem, unless the two wires had exactly the same dimensions – because a thin wire will stretch more easily than a thick wire.

To compare the stiffness of materials we define the concepts of stress and strain. Be careful – in everyday speech “stress” and “strain” mean (almost) the same thing – in physics and engineering they don’t! (see post 17.14).

If our wire has a cross-sectional area A, stress is defined by

If the stress is tensile, it is defined to be positive; for a compressive stress, it is negative. But we need to be careful; when the wire stretches, it gets thinner – so A decreases. If we use the original value of A to calculate σ, the result is called engineering stress; if we use the true value of A at each stage of extension, the result is called true stress. In practice, the change in A is usually so small that engineering stress and true stress are almost the same; we usually measure engineering stress because it is much easier to measure A before the wire stretches. Note that stress is a force divided by an area so is measured in N.m-2; this unit has a special name – the pascal (abbreviated to Pa), the unit of pressure (all this is explained in post 17.5). But, although strain and pressure are measured in the same units, they are not the same, because pressure is a scalar (see below).

Also, if we have two wires, made of the same material and with identical cross-sectional areas, it is easier to stretch a wire whose length is 1.0 m by 0.1 mm than it is to stretch a wire of length 10 cm by the same amount. So, if we are comparing properties of materials, like steel and copper, we need to allow for the effect of the length of the wires. We do this by calculating the fractional increase in length, called strain, by

We define the stiffness of a material by

E is usually called Young’s modulus, after the British scientist Thomas Young (1773-1829). There is an assumption hidden in this simple definition of E (called Hooke’s law) that we will think about in the next post. Since E is stress (measured in Pa) divided by strain (no units), it is measured in the same units as strain (Pa). 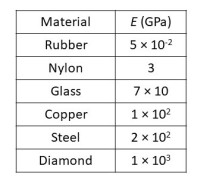 So far we have ignored something important about force – it is a vector (post 16.50). But if force is a vector, is stress a vector (a force divided by an area) or a scalar (the magnitude of a force divided by an area)? (See post 17.2 for more information on vectors and scalars). It’s neither! A stress makes a wire longer but it also makes it thinner – it has an effect perpendicular to the direction in which it acts; a vector has no effect in a perpendicular direction (post 16.50). And because the wire gets thinner, as it gets longer, the strain is one direction is associated with a strain in a perpendicular direction. Stress and strain are examples of tensors – numbers that have direction as well as magnitude but whose components are not orthogonal (post 16.50). I hope to explain more about tensors in a later post.

Although strain and pressure are measured in the same units (pascals), they are not the same – strain is a tensor and pressure is a scalar (post 17.5).

The purpose of this appendix is to explain the idea of true strain.

Let’s suppose that wire is stretched, by an infinitesimal amount (post 17.4) δL. Then its strain is

Integrating (post 17.19) this result, for a wire stretched from length L to L + ΔL gives

To find out how the integral was evaluated see post 18.15.

You might think that true stain, ε’, and engineering strain, ε, are very different. But, most of the time, we see strains whose values are small; a typical value might be 0.01 (a 1% strain). The table below shows that the values of ε’ and ε are then almost identical. 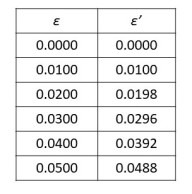