Before you read this, I suggest you read post 20.2. 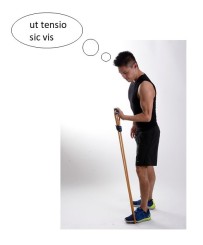 Hooke’s law is named after the English scientist and architect Robert Hooke (1635-1703). Most textbooks give the impression that Hooke’s law is important for understanding how objects deform when subjected to tensile stress. If you continue to read this post, you will see that I don’t agree and I think Hooke’s contribution to science has been exaggerated. If you want an alternative opinion about Hooke, read the book The Curious Life of Robert Hooke by Lisa Jardine.

Why did Hooke publish his law as an anagram? Presumably he wanted to make sure that he would get the credit for his discovery but didn’t want other people to know what it was. This behaviour doesn’t help the development of scientific ideas.

Usually Hooke’s law is stated as the stress, σ, in a material is proportional to the strain, ε, that it produces (post 20.2), so that a graph of σ against ε is a straight line, as shown above. This is true for some metals, until the stress is so high that an object is permanently damaged. The slope of the line is

For many materials, the graph shown above is really a shallow curve, like that shown below.

Then Hooke’s law is simply the recognition that short lengths of many curves look like a straight line (post 16.8). I explore this a bit more in the appendices.

In the second graph, the stiffness of the material (the slope of the curve) increases with increasing strain. This slope is given by dσ/dε, the derivative of stress with respect to strain (post 17.4), at a given value of ε.

E’ is sometimes called the tangent modulus. For many materials it is a more reliable way of expressing tensile stiffness than the conventional definition of Young’s modulus given in post 20.2.

This is a mathematical way of thinking about Hooke’s law.

If f is a function of x only (see post 19.10 for an explanation of this statement) then

Here f(0) is the value of f when x = 0, (df/dx)x = 0 is the derivative of f with respect to x (post 17.4) when x = 0 and so on; 2! and 3! (called factorials) are explained in post 18.15. The equation above is a statement of Maclaurin’s theorem; Maclaurin’s theorem is a special case of Taylor’s theorem that is proved at https://www.dcs.warwick.ac.uk/people/academic/Steve.Russ/cs131/NOTE26.PDF (to derive Maclaurin’s theorem put a = 0 in the result of this proof).

Now let’s think of σ as a function of ε. Then

When there is no applied stress, the strain is zero, so ε(0) = 0. Since ε is usually small (post 20.2), we will look at when happens when we neglect terms of the right-hand side for ε2, ε3 and so on. The result is

Since dσ/dε is constant at the point defined by ε = 0, this result is a statement of Hooke’s law. So, Hooke’s law will be true when ε is sufficiently small.

This is a physical way of thinking about Hooke’s law.

In post 16.37, we saw that we can explain the behaviour of atoms (in solids, liquids and gases) if they tend to attract each. However, if the atoms become very close, they will repel each other because each is trying to occupy the space needed by the other (you could also think of this repulsion arising from repulsion by the electrons in the two different atoms). These forces, between atoms that are not chemically bonded (post 16.37), are called the attractive and repulsive van der Waals’ forces. Further information on this topic is given in post 19.2.

Here U is the potential energy that has a minimum value, U0, when the separation, r, between the atoms is r0. 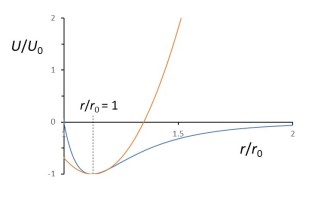 This means that the separation between the atoms is proportional to the force, which is another way of stating Hooke’s law.

However, this result is only true when the material consists of atoms that are not chemically bonded (as in metals) and for very small separations between the atoms (small strains).