In post 16.37 we thought about liquids as fluids – things that can flow. But if we have liquid in a container, it doesn’t usually flow.

This weight is a force that pushes down on the base of the container; the force acting on a unit area is called the pressure and is given by

The previous paragraphs assume that ρ doesn’t change when the height, h, of the liquid column increases. You might expect that as h increases, the pressure p will increase and that the liquid molecules would be squashed closer together (post 16.37), making it more dense. And you would be right! But the effect is slight. We might need to consider it in the deepest oceans and would certainly need to consider this effect in gases (where the molecules are further apart – post 16.37). It is because liquid molecules cannot be squashed very much closer together (liquids are almost incompressible) that we use a liquid (brake fluid) in the braking system of a car to transmit pressure.

The units in which pressure is measured are the units of force (post 16.13) divided by the units of area N/m2 or N.m-2. However, this unit is given a special name – the pascal (abbreviated to Pa).

The only possible explanation is that equal and opposite pressures exist at any point in a liquid – acting from side-to-side as well as from top-to-bottom. 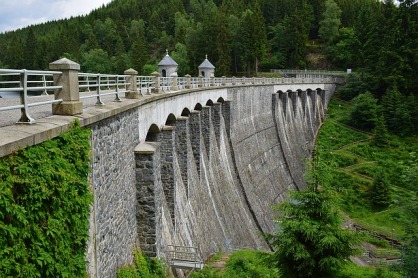 In conclusion, the pressure in a liquid increases with depth and acts equally in all directions. That is why dams are built much wider at the bottom than at the top. The base of the dam has to withstand a much higher pressure, from the water in a reservoir, than the top. And the pressure pushes sideways, against the wall of the dam, as well as downwards.