In post 20.10 I described toughness as the energy absorbed by a unit volume of material before it fractures. It is often simpler to understand the process of fracture (when something breaks, post 20.10) in terms of energy rather than the stress (or force) applied. We often have the choice of explanations based on force or energy to explain what we observe. For example, we can explain the speed of a falling object using the idea of energy (post 16.21) or force, mass and acceleration (post 17.20). This ability to use two different approaches shouldn’t surprise us because the concept of energy is derived from the concept of force (post 16.21). In post 17.16, I used Bernoulli’s equation, which is based on the principle of conservation of mechanical energy (post 17.15) to explain how planes fly because it is much simpler than an explanation based solely on forces.

Let’s start by thinking about breaking a thread or thin string. If we pull steadily, it may be difficult to break but, if we pull it quickly and suddenly, it will break more easily – this process is described by the word “snap”. Why does it matter how quickly we apply the force? Let’s think about energy. When we apply force, the thread stretches (post 20.2) – so the force moves it’s point of application and so does work on the thread (post 20.6). This is another way of saying that the energy of the thread increases. This energy can be used to cause fracture (post 20.10). We can think of the formation of the two surfaces formed, when the thread fractures, as a means of dissipating the energy stored in the thread; we can think of this surface energy as arising because surfaces behave as if they are in tension (post 17.43). But the behaviour of a ductile material, that can deform non-elastically without fracture (post 20.10) suggests that there are other processes that can occur, within a material, to dissipate energy. But these processes cannot occur instantaneously. If we supply energy more quickly than it can be dissipated, the thread will fracture quicker than if the energy is supplied more slowly. When something snaps (fractures suddenly) we often hear a sound (a “cracking” sound or a “bang”) because some of the excess energy may be emitted as a sound wave (posts 18.13 and 19.8). 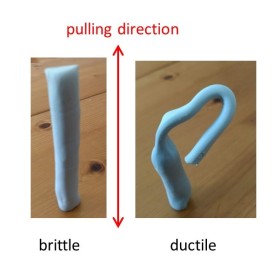 Now let’s think about the appearance of a fracture surface. I’m going to use cylinders of “Blu tack”, a material that is used to stick pictures to walls. In the pictures above, I have pulled these cylinders until they fracture. When I pull fast, a fracture surface appears at right angles to the pulling direction. This flat surface is characteristic of what is called a brittle fracture. Materials like cast iron and ceramics often fracture in this way. When I pull slowly, the fracture surface is drawn out in a more complicated shape. This appearance is characteristic of a ductile fracture. The complicated shape of the surface can be explained by energy being transmitted through the material before fracture appears. Since atoms in a solid are in close contact, there are several mechanisms that they can use to transmit energy to each other (as occurs in the conduction of heat, post 19.14). But these mechanisms are not instantaneous. So, when our Blu tack was pulled quickly, there was not enough time for the energy to be dissipated in this way and we formed a brittle fracture. Formation of ductile fractures occurs in copper, aluminium, gold and most polymers.

The demonstration in the previous paragraph works even better with a material called “silly putty” that is sold as a child’s toy. This also teaches us the importance of play for a child to gain intuitive ideas about how the natural world works (post 17.46). There is an increasing tendency for children to be encouraged to spend their spare time in “worthwhile” activities supervised by adults. But, I believe, that if they don’t have time to amuse themselves, they won’t spend time on the “pointless” activities that are essential for developing the natural curiosity and intuitive sense about how the natural world works that are essential for understanding science.

If we take a flat trip of metal (shown in black, in the picture above) and repeatedly bend it upwards (red) and downwards (blue), a crack will spread across it until a fracture splits the strip into two parts. This type of fracture is called a fatigue fracture. The same type of fracture can occur in runners who may apply a repetitive compressive force to their led bones when running on a hard surface – confusingly, it is then called a stress fracture.

In the picture the lower surface of the strip is placed in tension when it is bent upwards (post 20.9). The stored elastic energy could be used in recoil (post 20.6). But the strip has been bent downwards, by an external force, without the need for it to use this stored energy. So the stored energy is not dissipated. Gradually, as the strip is repeatedly bent, it gains more and more energy. Eventually, the energy is dissipated by fracture.

In conclusion, the concept of energy enables us to explain the formation and appearance of different types of fracture.