In post 18.26 we saw that molecules (or atoms or ions) move spontaneously from regions of high concentration to regions of low concentration, in order to increase the entropy of the system. Processes that increase entropy occur spontaneously because they lead to a more probable distribution of something – in this case molecules; this spontaneous increase in entropy can be considered as a tendency to increase the disorder of a system, as explained in posts 16.35 and 16.38.

Heat flows spontaneously from hot things to cold things. This observation is one way of stating the second law of thermodynamics and is equivalent to stating that heat flows to increase the entropy of a system; this is explained in posts 16.34 and 16.35. When heat moves spontaneously in a solid, we call the process thermal conduction or conduction of heat or, simply, conduction. Since heat is molecular kinetic energy (post 16.35), we can think of conduction of heat as diffusion of molecular kinetic energy; the molecules can transfer kinetic energy to their neighbours by inelastic collisions (post 17.30).

Given the similarity of the two processes, it’s not surprising that they can be described by very similar equations. Similar analogies exist between the descriptions of translational and rotational motion (post 17.39) and between the behaviour of electrical and mechanical systems (post 18.24). 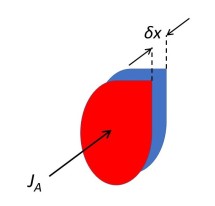 In the picture above, molecules of A diffuse in a medium B (that could be a vacuum) in one dimension, in the direction shown by the arrow. We will consider the rate, JA, at which the molecules move through the volume between the red and blue surfaces, that are an infinitesimal distance, δx apart. The two surfaces have identical dimensions, are perpendicular to the arrow, and have a unit area (1 m2 in SI units, post 16.12). The arrow passes through equivalent points in both surfaces.

where DAB is a constant. In the limit, as δx tends to zero (see post 17.4), this approximation becomes exact and we can write

Equation 1 is called Fick’s law or Fick’s first law. Experiments show that it describes the diffusion in a wide range of systems. However, the derivation assumes that A passes through B without any interaction occurring between molecules of A and B. If such interactions occur, for example, if there is a chemical reaction (post 16.33) between A and B, the derivation above and, therefore, Fick’s law is not valid.

The equation that describes conduction of heat can be derived in the same way. The result is

Here JQ is the rate of flow of heat, across unit area perpendicular to the direction of flow, dT/dx is the temperature gradient and the constant, k, is called the thermal conductivity of the stuff the heat is flowing through. Equation 2 is called Fourier’s law of heat conduction and was the inspiration for Fick to derive equation 1 – there is more about Fourier and his work in post 18.14.

A material that is a good conductor of heat has a high value of k. Metals have very high values of k: if you stir a hot drink with a metal spoon, the handle gets hot, if you use a plastic spoon the handle doesn’t get hot. This is because, in metals, the electrons are free to move in conduction bands (post 16.31) and transmit heat energy. Any further explanation would make this post very long and very complicated!

Equations 1 and 2 allow us to calculate rates of diffusion, for example, in the controlled release of drugs, and thermal conductivity, for example, to help design thermal insulation of buildings. They can also be developed into partial differential equations, analogous to the wave equation (post 19.12) to describe how diffusing materials and temperature depend on position and time. This will be the subject of the next post.