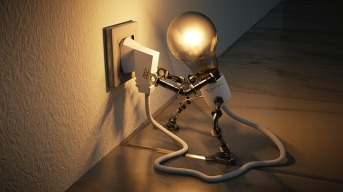 where I represents the electrical current flowing. Since I = dQ/dt, the equation above can be written as

Equations 1 and 2 have exactly the same form and so must have the same kinds of solutions. But that’s not all. In both equations, the first term on the right-hand side represents storage of energy, the second represents dissipation of energy and the third represents resistance to change (inertia).

In the electrical system we consider that there are three components: a capacitor, a resistor and an inductor.

We can think of the mechanical system in the same was as: a spring, a dashpot (post 18.9) and an object of mass m.

This is summarised in the table below.

How can we use these analogies? I shall give three examples.

Example 3: in post 18.11, we saw that an object bouncing on the end of a spring had a natural frequency of

So, we would expect the natural frequency of an electrical system to be

Most elementary textbooks give the impression that electrical and mechanical systems behave completely differently. But we can use the analogies between them to help us to understand how they work and to develop ideas.