It can be the same as standing still!

What is the difference between movement at a constant velocity and standing still? If you think carefully about it you may decide that the answer is – nothing!

If you’re bothered by my use of the word “velocity” instead of “speed” see the fourth paragraph in Post 16.2. If not, forget the previous sentence. 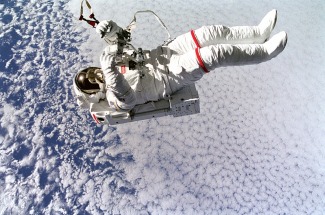 There is no reason to suppose that the space capsule isn’t drifting with a constant velocity – there are no fixed reference points in space. So is the spanner stationary or moving? It all depends on the state of motion of the observer.

If the train suddenly got faster, slowed down or started to go round a sharp bend you would find it more difficult to drink your tea because it tends to continue to move with its original speed in its original direction (Newton’s first law – Post 16.2) and so sloshes around in the cup.

Something has to pull or push an object to change its state of motion, according to Newton’s second law (Post 16.2). We call this “something” a force.

So a change in the speed or direction of an object is not the same as standing still. If the astronaut in our first example had thrown the spanner directly in front of him both he and the first astronaut would have seen it move away and the rate of change of speed would have been the same for both of them.

But since there is no difference between standing still and moving at a constant velocity, changes in the motion of an object are the same when it is in your house or in a train moving in a straight line at a constant speed. So, for example, the time it takes a pendulum to complete one oscillation is the same in both places. And the velocity of the train has no influence – provided it doesn’t change. This is called the Galilean principle of relativity.

16.9 Does the sum move around the earth?
16.12 Measuring movement
16.13 Changes in movement
16.14 Aliasing
16.19 Why do things stop moving…
17.4 Displacement, velocity and acceleration
17.19 Calculating distances from speeds
17.39 Translational and rotational motion