In post 19.5, we saw that when you drop a piece of zinc into a dilute acid (post 17.49), the zinc dissolves and hydrogen is produced; this is because charge moves from the H+ ions (post 16.39) in the acid to the zinc atoms – the zinc is at a lower electrical potential (post 17.44) than hydrogen.

But if you drop a piece of copper into the acid, the charge remains on the H+ ions and is not transferred to copper. So, copper is at a higher electrical potential than hydrogen.

What happens if we put a copper rod and a zinc rod in dilute acid and connect them together? In the picture they are connected, by copper wires, through a resistor and an LED. Charge flows from copper to zinc, because it is at a lower potential. Flow of charge is called current, I, and the current produced is I = V/R, where V is the potential difference between copper and zinc and R is the resistance (post 17.44) between the two rods. The LED emits light – showing that a current is flowing.

We have what most people call a battery but science textbooks usually call a cell. (In textbooks, although not in normal English, a battery is several cells joined together.) The potential difference between the copper and zinc rods in this battery can be measured and is 1.10 V (post 17.44).

When charges meet the zinc rod, zinc ions are formed that dissolve in the weak acid. This reaction (post 16.33) can be represented by

where e– is an electron (post 16.27). The copper rod loses positive charges, because they flow to the zinc rod. So the copper rod gains negative charge that attracts Zn2+ and H+ ions. The H+ ions (not the Zn2+) will lose their charge, because the charge is at a higher potential on a hydrogen atom than on a zinc atom (post 19.5). The reaction that occurs is

So, bubbles of hydrogen appear around the copper rod. When we consider what happens around the two rods we see that there is no overall gain or loss of electrons in the system.

In the picture, charge flows around a circuit. It is carried through the solids by electrons (flowing in the opposite direction to the positive charge – see also post 17.44) and through the liquid by ions. We call the rod that forms positively charged ions the anode (the zinc rod in this example) and the rod that they flow towards the cathode.

You can make a battery, like the one in the picture, by sticking copper and zinc rods in a lemon (which contains citric acid); if you can’t find any zinc, you can use iron but the potential difference between anode and cathode will be reduced.

But don’t forget the resistor when you connect the anode and the cathode. If you do, there will be almost no resistance between them, so the current will be nearly infinite. This very high current will cause irreversible damage to your device. Failure of this type is called a short circuit.

There is a problem with the battery shown in the picture – nobody wants to carry a tank of acid (producing hydrogen, which forms explosive mixtures with air) around with them. So, we need batteries that are much more convenient to use. 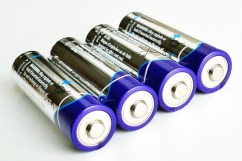 The most common type of (non-rechargeable) battery in everyday use (in 2019) is the alkaline battery. It contains a wet paste instead of a liquid and so is an example of a dry cell.

The alkaline battery has a zinc anode and a manganese (IV) oxide cathode. Manganese (IV) oxide is a mixture of Mn4+ and O2- ions, with two O2- ions for every Mn4+ ion, so it is often represented as MnO2. There is wet potassium hydroxide (a mixture of K+ and OH– ions, post 16.40); it is the presence of wet potassium hydroxide that makes the battery “alkaline” (post 17.50). The reaction that occurs at the anode is:

and the reaction that occurs at the cathode is

Since zinc atoms gain charge and manganese ions lose charge, the magnesium (IV) oxide must be at a lower potential than zinc. The potential difference between them is 1.43 V.

Why is there a circuit when the anode and cathode of an alkaline battery are connected through a resistor? The charge is carried by OH– ions that dissolve in the water surrounding the solid potassium hydroxide. (Since these ions are negatively charged, the charge moves in the opposite direction to the ions.) The importance of OH‑ ions becomes clearer when we see how they are involved in the reactions at the anode and cathode. We can consider the reaction, shown above, at the anode, as

where (s) means “solid”, (aq) means “dissolved in water” and (l) means “liquid”. And, at the anode, we can consider the reaction as

The two reactions occur simultaneously, so the water molecules, OH‑ ions and electrons are used at the same time as they are formed. But for the reactions to occur, there must be an overall movement of OH‑ ions from the cathode to the anode.

Notice that the alkaline battery does not produce any gases – unlike the first battery we looked at, so it can be made into a sealed unit, as shown in the picture above. The battery is surrounded by a stainless-steel case, that seals in the wet potassium hydroxide and protects the anode and cathode. The cathode is in contact with this case but there is electrical insulation between the anode and the case.

Alkaline batteries are usually intended to be disposable and so present recycling problems. In a later post, we will look at rechargeable batteries.