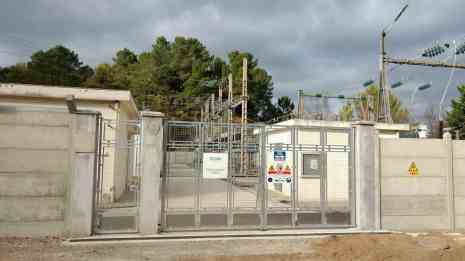 So, whichever way the charge moves, it releases energy. This is another way of saying that energy is released by an electrical current, since current is flow of charge.

The final step comes from the definition of a steady current I, flowing for a time interval Δt (post 17.44). According to Ohm’s law V = IR, where R is the resistance to movement of the charge (post 17.44). Substituting this expression for V into the equation above gives

A conventional electrical heater is simply a resistor (post 17.44) with a high value for R. According, to equation 1, a high value of R leads to release of more energy, mostly in the form of heat.

Let’s think about an ordinary electrical kettle, like the one in the picture above. Its purpose is to boil water. It is designed to hold water that surrounds a resistor called the heating element. My kettle has a power of 2.0 kW and draws current from a 220 V supply. (Giving a value to the domestic electrical voltage is a bit more complicated than I’m making it seem because it supplies what is called an alternating current, but this value gives a good guide to what is happening). I want to know (1) the resistance of the heating element and (2) the current drawn by the kettle. According to Ohm’s law, V = IR which is the same as I = V/R (post 17.44). Putting this expression for I into equation 2 gives

Here Ω is the standard symbol for the ohm, the unit of electrical resistance (post 17.44). If you wonder why I haven’t written the answer as 24.2 Ω, see post 16.7. We can now use Ohm’s law (see above) to calculate the value of I from the values of V and R; the result is

This is fortunate because the cabling that supplies my kettle can deliver currents up to 16 A.

Calculations, like the one above, are important for many aspects of electrical safety and circuit design. Once we understand the definition of an amp, a volt and an ohm (post 17.44), we can calculate energy and power requirements, and heating effects, for generators, domestic appliances and many other applications of electricity.