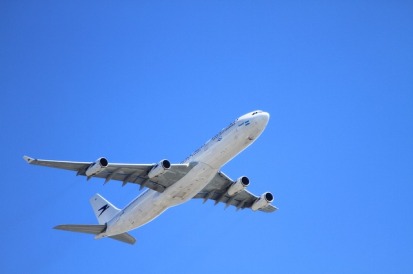 We will think about this question by considering a plane whose wings have the cross-sectional shape shown in the picture below. 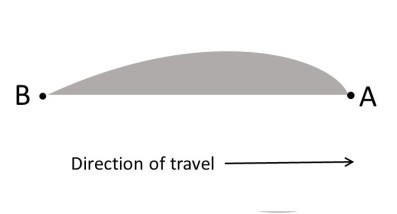 According to Bernoulli’s equation the quantity

is conserved in laminar flow of a fluid with negligible viscosity (post 17.15). In this equation p is the pressure in the flowing air, ρ is its density and v is its speed; Ψ is a measure of the potential energy which is the same at A and B whether the air has flowed over or under the wing. So, when we apply Bernoulli’s equation to air flowing over and under the wing, we get the result that

Since vover > vunder,it then follows that pover < punder. In other words, there is a net pressure under the wing of

If the total wing area of the plane is A, there is an upward force on the wings of AΔp (post 17.5).

So the upward force, called lift, on the plane depends on its speed, since Δp depends on speed.

This is the explanation for why planes fly that you will find in most textbooks. It’s what I was taught when I was a student. And the idea that difference in air speed under and over the wing causes lift explains why planes fly. But if we apply the arguments exactly as I have done above, you don’t get the right answer for the lift. I think the reason is that air can flow from A to B by the two paths (over and under the wing) without arriving at exactly the same time, while still preserving laminar flow. More details are given at https://www.grc.nasa.gov/www/k-12/airplane/bernnew.html.

And remember that all this applies only to laminar flow. If the plane encounters turbulent air flow (post 17.15), the pattern of forces acting on the wings is much more complicated – leading to the irregular motion that is familiar to all passengers on planes!