Like most people, I hadn’t thought much about this topic until the last few weeks. But covid-19 means that every day we see numbers related to the spread of a pandemic. 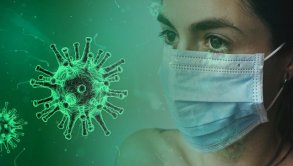 An epidemic has been defined as the “widespread occurrence of infection in a community in a given time”.

A pandemic has been defined as “an epidemic that has spread across a large region, for instance multiple continents, or worldwide”.

You will see that both definitions are vague – how large are “widespread”, “large” and “multiple”? The use of these words is undefined and subjective (see the use of words like “good” and “bad” in post 16.36).

This natural spread cannot continue indefinitely. Many people will develop a natural immunity to the virus – the virus will be destroyed by their immune system. People who have previously been infected will probably be immune from further infection. This means that, if they are re-infected, they will destroy the virus. When the process has gone through many stages, there will then be many of these immune people who cannot be infected. This process is called herd immunity. Development of herd immunity was the initial response of the UK government to the covid-19 pandemic.

Subsequently computer models showed that this approach was not going to work. Computer modelling is described in post 19.17, although for a problem that is very different to the spread of diseases. The idea is to find out what is likely to happen in a range of different circumstances. These could include, for example, how many people meet each other in a day. It then emerged that the health care system would not be able to cope with the number of people who would be infected in trying to achieve herd immunity.

This use of computer modelling has been criticised by several people – including the editor of the “Lancet”, a British medical journal. The critics would prefer to use the experience of other countries. But this experience may not be a reliable guide because patterns of social mixing are very different in different countries. For example, it is very common for large groups of Chinese people to share a restaurant meal together, but this is much less common in the UK.

So far, I’ve written about the natural spread of the disease. An effective vaccine can increase the number of immune people very rapidly so that the disease will not continue to spread. A cure would mean that the healthcare system wouldn’t have to wait for an infected person to recover naturally and so could make it easier to deal with large numbers of infected people.

An important question is – how many people are going to die in a pandemic? To answer this question, we need to know the mortality rate or fatality rate of the infection. This is usually expressed as the percentage of infected people who will die from the disease. For covid-19 this is about 0.5%, although it’s higher for older people (perhaps as high as 3% for people aged over 65 years). In the table below, I have converted the number of infections, calculated previously, into the expected number of deaths (using the 0.5% figure); I have expressed the result as the nearest whole number (post 16.7).

In the table below, I have listed R0 and fatality rate values of several other diseases, for comparison.

We can see that the risk of infection and of death is greater for covid-19 than for seasonal flu and for the H1N1 virus that causes “swine flu”. The reason that covid-19 appears more dangerous than HIV is because a lot of research has led to effective treatments for HIV infections but not yet for covid-19. Ebola has a lower R0 value than covid-19 but is more dangerous because of its much higher fatality rate.

How reliable are these numbers? Not very! I have used average values sometimes from very wide ranges. R0 values can depend on the proportion of susceptible people in a population and so could vary geographically. Fatality rates depend on time, because of increased knowledge of how to treat the disease; the 1918 H1N1 pandemic may have killed 3% of the world’s population but the 2018 pandemic killed only 0.007%. Fatality rates also depend on the age of the people infected (old people and young children are more at risk than healthy young adults) and on geography (more people will die in poor countries, with less healthcare and poor nutrition, than in wealthy countries). For example, I have not given a fatality rate for SARS (severe acute respiratory syndrome) because the current figure in the USA is 0% but worldwide it has been as high as 15%.

This is a very simplified account of a very complicated subject. It is further complicated because, like many problems society faces, science alone cannot provide a solution (post 16.32). Dealing with a pandemic involves financial, social and political considerations. Finance is needed to cover the costs of healthcare and to support an economy damaged by loss of productivity caused by social isolation. Social isolation causes problems like care of the elderly, the psychological effects of isolation and many others. The political problems are also considerable – how much taxation will we tolerate to provide finance, how many restrictions on our behaviour will we tolerate and so on. Many of these problems are easier to solve in a country like China where people are more used to doing what they are told by the government. This may partly explain why more people have died as a result of the covid-19 pandemic in Italy (population 60 million) then in China (population 1.4 billion).