When light shines on some materials, mostly metals, electrons may be emitted. This effect is called the photoelectric effect and the electrons emitted are called photoelectrons. Presumably, light energy overcomes the energy that attracts the electrons to the atomic nuclei in the metal (post 16.29) and gives them kinetic energy (post 16.21). The moving electrons are the same thing as an electrical current moving in the opposite direction (post 17.44).

The photoelectric effect can be used to make sure that you don’t get trapped by an elevator door. When the door is open, a beam of light shines across the doorway, to create a current that activates a mechanism to close the door. But, when someone walks through the open doorway, the light beam is interrupted, so the door remains open.

The kinetic energy of the photoelectrons can be measured by applying a potential difference (post 17.44), V, that just prevents the electrons from leaving the material. If e represents the charge on an electron (post 16.25), its kinetic energy is then given by

We might expect that K, and hence V, would depend on the amplitude of the light wave because the energy of a wave is proportional to the square of its amplitude (post 19.8). But it doesn’t. 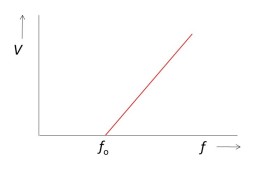 This is not what we would expect if the energy of light depends on its wave motion.

The explanation was provided by Einstein, leading to the award of the Nobel Prize in Physics in 1921. You might suppose that Einstein won the prize for his work on the theory of relativity. But he didn’t – he won it for explaining the photoelectric effect.

I suppose that Einstein was inspired by Planck’s theory of the radiation of heat in which energy was given off as “packets” called quanta whose energy was given by hf, where h is Planck’s constant (post 19.19). In the photoelectric effect, the energy of the photon is used to:

The energy required to remove an electron from the surface of a material is called the work function, φ, of that material. So

If we equate K with Ve we get the result that

that can be rearranged to give

when k = h/e and f0 = φ/h. This equation describes the graph of experimental results shown above.

This theory explains the photoelectric effect – but it’s much more important than that.

It shows that Planck’s idea of the quantum (post 19.19) was more than a trick for fitting some unexplained curves – it really tells us something fundamental about the nature of electromagnetic radiation.

We can think of the packets of light energy as particles of light – called photons.