In posts 18.6 and 18.7, we saw that a simple pendulum, consisting of a small object hanging by a light string of length L, will swing backwards and forwards with a frequency of

where g is the magnitude of the earth’s gravitational field (post 16.16).

This statement about frequency is equivalent to saying that the time, T, that the object (in the picture above) takes to move from A through B to A’ and back again to A, is given by

The relationship between frequency and this time period is explained in post 16.14.

In posts 18.6 and 18.7, we assumed that the pendulum did not lose any mechanical energy and goes on oscillating indefinitely.

Now suppose that the pendulum, or any other oscillating device does lose energy. In a mechanical device, this could be because of drag (post 17.17) or friction (post 16.19).

How can we keep our device oscillating? We have to supply energy to compensate for the energy dissipated. Supplying energy is equivalent to doing work (post 16.21). And doing work means applying a force to move an object (post 16.20). 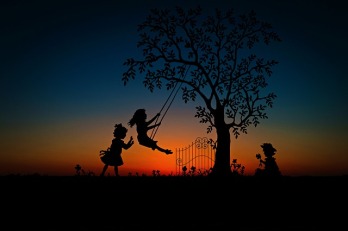 Resonance is not confined to mechanical systems. The cavity magnetron was developed in 1940 by John Randall and Harry Boot. It is a device that enables electrons to oscillate at the natural frequency of microwaves. Originally it was used in radar for tracking the movement of aircraft and ships. Now most of us have one in our kitchens – in a microwave oven.

If you go to hospital for an MRI scan, the nuclei of the hydrogen atoms in your body (most of them in water molecules) will resonate at the natural frequency of radio waves. The radio waves emitted are used to form an image of the inside of your body.

So resonance can be very useful – but it can also cause problems. The London Millenium Footbridge was opened in the year 2000. The distinguished sculptor Sir Anthony Caro had a brilliant idea for what the bridge should look like (see above). Unfortunately, the equally distinguished architects (Foster and Partners) and civil engineers (Arup Group) were less brilliant. The bridge swayed with a natural frequency that was close to the frequency of people walking over it – it was known as the “wobbly bridge” and had to be closed for two years while its structure was modified.

At least the problem with the London Millenium Footbridge could be solved. The Tacoma Narrows bridge in the USA shook itself to pieces because its resonant frequency matched the frequency of gusts of wind (https://www.youtube.com/watch?v=j-zczJXSxnw).

So, like so many things, resonance is a very useful phenomenon but it can also be the source of serious problems.

18.7 The simple pendulum
18.6 The pendulum: a simple harmonic oscillator
16.14 Aliasing