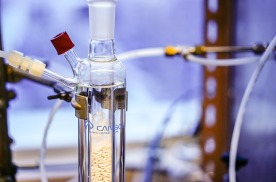 I believe that most scientific research benefits somebody but, at the same time, some of it may have the potential to cause harm.

Let’s think about a specific example – a chemist who is making new compounds (post 16.30) that appear suitable as anti-cancer drugs. If this research is successful and the compounds work as intended, people suffering from cancer will benefit. So too will a lot of other people: the doctors and nurses who treat them, their friends and relatives and so on. But so will some other people. Making the new compounds is not enough to develop a new treatment; they must be tested to see if they work (posts 16.3 and 16.46) and if they are safe (post 16.1). (Most new compounds that are developed to treat cancer don’t work!) This testing provides work for other people.

Now let’s suppose the chemist needs to develop new techniques. These techniques may be used by other chemists who want to make compounds to be used for a completely different purpose. These other chemists will then also benefit if the research is successful.

If the research is successful it will also benefit the pharmaceutical industry (including employees, shareholders) by giving it a potential new product.

We have seen that other chemists may be interested in the new drug – but members of the general-public often like to read about new medical discoveries. So, the results of the research may benefit journalists looking for an interesting story and their readers who like to read about medical research.

And don’t forget the benefits to the chemist who made the new compounds. A successful outcome to the research will benefit his/her career. If the chemist is a student, the work may lead to a qualification (like a PhD degree) that provides an educational qualification.

Could this research cause any harm?

Now let’s suppose that the new methods developed to make these compounds also produces toxic by-products. If these methods are used in another industrial sector that makes tonnes of products, these by-products have the potential to cause serious environmental and health problems.

Suppose that the work is reported by a journalist in a way which misrepresents it. Then the journalist causes harm by providing misleading information.

Not all research has so many potential beneficiaries. For example, a simple project with a predictable outcome might be given to a student who wants to get a PhD degree. If the project had unexpected results, it could be interesting to other scientists (see post 16.2) – provided the work was done carefully. But the most likely beneficiary is the student who gets a degree and nobody else.

When scientists want to get financial support for a research project, they may be asked to describe who could benefit from the project. Some scientists find this surprisingly difficult. Let’s concentrate on the example of making a potential new anti-cancer drug. Now let’s suppose that a senior scientist will direct the project and wishes to recruit a younger, less experienced chemist to do the laboratory work. The project involves using an idea for a new technique to be developed, as a part of the project.

What are the potential benefits of this project?

Training and career development for the young chemist to be recruited.

Development of a new technique that chemists can use to make new compounds.

Development of new compounds that are potential anti-cancer drugs.

If these drugs work and are safe, a further benefit is a new drug for treating cancer. This helps people suffering from cancer, medical staff who treat cancer and the pharmaceutical industry.

If the scientist seeking funding works in a university, he/she may be interested in telling the general-public about the research – through a web site or press releases to journalists.

I believe that it is important for scientists to define who will be interested in the results of a research project before they start it. Otherwise they risk doing research that nobody else is interested in. And what is the purpose of that?