How often have you heard or read the phrase “Exponential growth”? What does it mean? Do the people who use it always know – I doubt it! 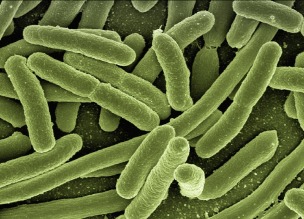 This argument is continued in the table below.

If you continue the calculation, you will find that after only 10 doubling times, there will be over 1000 times the number of bacteria that we started with (your exact answer should be 1024n).

It is this progressive doubling of the number, as the time increases in a single interval, that characterises exponential growth. As you can see from the numbers, this leads to a very rapid increase. This can also be seen in the graph, above, showing the number of bacteria (expressed as multiples of n) against time (as multiples of t).

Of course this can’t go on for ever. If it did, the earth would by now be covered in a deep layer of bacteria! What happens is that the colony starts to run out of food and to poison itself with its own waste products. It then ceases to grow so rapidly and the exponential growth model no longer describes what will really happen.

In general, exponential growth must always be unsustainable because whatever fuels it will eventually become depleted.

One thought on “16.5 Exponential growth: bacteria”