Before you read this, I suggest you read post 20.7.

Natural rubber is a polymer consisting of isoprene molecules joined as shown in the picture above. It is obtained from the sap of rubber trees which consists of the polymer molecules dispersed in water. The water is removed and the polymer rolled into thin sheets. The dispersion of the polymer in water and the sheets are both called latex; the dispersion in water is sometimes called liquid latex. 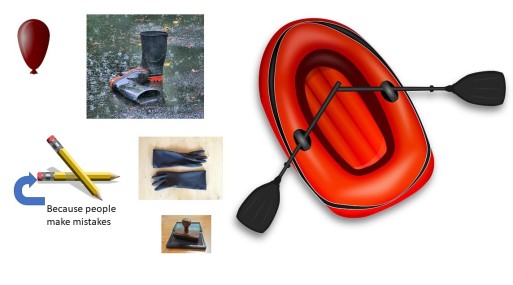 The thin sheets are treated in two ways to make them suitable for the wide range of applications shown in the picture above:

Fillers are particles (typically 1 – 100 μm across), for example, of carbon, that separate the polymer chains and makes the rubber stronger. Cross-links are covalent bonds (post 16.30) between the different polymer chains. They make it more difficult to separate the chains and so stiffen the rubber. They are typically formed by heating sulfur (S) with rubber, as shown in the picture below. Cross-linking of rubber is often called vulcanisation.

The size, concentration and chemical composition of the fillers and the concentration of cross-links are used to form a rubber with the physical properties required for a particular application.

Tyres are usually made of synthetic rubber made by joining many styrene and butadiene molecules (see below) together to make a polymer.

Solid silicones are sometimes called silicone rubbers or silicone elastomers. Silicones with a lower relative molecular mass (post 16.33) are liquids, because their molecules can move more easily (post 16.37), and are called silicone oils or silicone grease, if they have a high viscosity (post 17.17). Don’t confuse the element (post 16.27) silicon (Si), used in silicon chips, with silicones that contain -O-Si-O-Si-O-Si- chains, as shown in the picture below.

Although the physical properties of silicone elastomers are very similar to those of rubber, their chemical composition is very different, as shown in the picture above. Here the R groups contain carbon atoms, for example methyl (-CH3), ethyl (-CH2.CH3) and phenyl (-C6H5). They can be cross-linked by molecules that react with the R groups on different polymer chains.

In future posts, I hope to discuss the physical properties of rubber in more detail.

20.9 Stiffness and strength
20.11 Elasticity of rubber