We expect a rod, whose cross-section and density remain constant along its length, to balance at its centre. Why?

The picture above shows a rod balanced in the way we expect. We could consider the rod to be made up of a lot of infinitesimally thin strips, each of mass δm, with the same cross-section as the rod itself. For every strip on the left-hand side of the centre, there is another strip an equal distance from the right-hand side of the centre. Gravity acts on each strip to create a force whose magnitude is g.δm (post 16.16). Now let’s think about a strip a distance r from the centre, O, of the rod on the left-hand side. The effect of the force acting on this strip is to generate a torque of magnitude rg.δm that tends to turn the rod in an anticlockwise direction (post 17.10). Because the torque tends to induce an anticlockwise rotation, it is conventionally considered to be positive (post 17.10). However, there is another, identical, strip on the right-hand side of O, at a distance of r. This strip experiences an equal and opposite (clockwise) torque of – rg.δm. So, the total torque acting on the two strips is zero. When we add the toques on all the strips in the rod, both right and left, the total is still zero – so the rod doesn’t turn – we say it balances.

A cone has its centre of mass and, therefore, its centre of gravity on its axis (post 17.21). It can then be balanced on its tip, as shown in the picture above. Its weight acts vertically down its axis, when it is in the position shown, because its centre of gravity is on the axis; according to Newton’s third law (post 16.2) a support on this axis exerts an equal and opposite force on the cone. So, the total force and, therefore, the total torque acting on the cone is zero and it balances.

Now let’s think about a cylinder on a flat slope inclined at an angle θ (the Greek letter “theta”) to the horizontal, as shown above. We will consider that there is sufficient friction (post 16.19) to prevent the cylinder from sliding down the slope. The centre of mass and, therefore, the centre of gravity of the cylinder is half way along its axis (post 17.21). If the cylinder has a mass m, gravity exerts a force of magnitude mg vertically downwards from this centre (post 16.16).

If the cylinder where to fall over, because of the tilt of the slope, it would fall downhill: it would turn anticlockwise about the red point. In the picture above the force vector is a perpendicular distance r on the downhill side of this point, so the gravitational force exerts an anticlockwise torque of magnitude mg.r on the cylinder. As a result, it falls over. 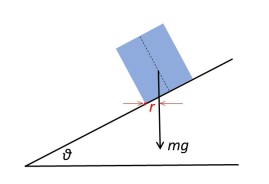 The picture immediately above shows a shorter cylinder on the same slope. Now the gravitational force vector is a perpendicular distance r’ on the downhill side of the red point. So, it still exerts an anticlockwise torque on the cylinder. But the torque now tends to turn the cylinder on to the surface of the slope – so it does not fall.

Whether or not an object falls over, depends on its shape, dimensions and the position of its centre of gravity.