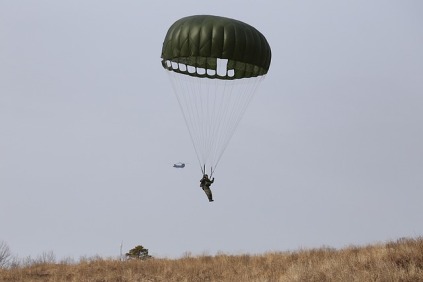 If we ignore viscosity (post 17.17), an object of mass m that falls from a height h, gains a speed of v =√(2gh) (post 16.42), where g is the magnitude of the earth’s gravitational field (post 16.16). This result was derived by assuming all the potential energy of the object is converted to kinetic energy – in other words, mechanical energy is conserved (post 16.21). If mechanical energy is not conserved (for example, by being converted into heat, post 16.35) we say that energy has been dissipated (post 17.17). Note that v is independent of the mass of the object.

This result works well for dense, compact objects – like rocks, metal balls etc. It implies that all objects will hit the ground at the same time, because they fall through the same height with the same starting speed (zero) and the same finishing speed (v). It is sometimes claimed that Galileo showed this to be true by dropping different objects off the leaning tower of Pisa. But it’s almost certain that he never did the experiment.

When drag is not negligible, which is the same thing as saying when we can’t ignore viscosity (post 17.17), the potential energy of an object before it falls through a height h is still mgh but some of this energy is used to overcome drag – the rest is converted into kinetic energy. The drag force is given by Mv (post 17.17), where M depends on the shape and dimensions of the object and the viscosity of the stuff (usually air) that it is falling through.

where g is the vector representation of the earth’s gravitational field. Rearranging this equation gives

which is called the terminal velocity of the object.

This is very fast – too fast for me to fall safely from a plane without a parachute! (If you look up the terminal velocity of people falling from planes, the value will be lower than this – because they don’t usually roll into a ball, or dive; either of these streamlines the person and so reduces the drag, see post 17.17).

So how does a parachute help? A parachute is simply a device for increasing M and so decreasing v. Since a parachute is not a sphere, M is not equal to 6πηr but the idea that it increases with radius is still true. A parachute has a very large value of r to increase M. Its shape also means that it traps air which cannot flow smoothly around it – it is very far from being streamlined. Overall, a parachute has a very high value of M so it greatly decreases the magnitude of the terminal velocity – allowing a trained person to jump safely from a plane.

When we develop a model for something like an object falling through air, we try to keep it as simple as possible (post 16.42). So, for example, when we consider objects like rocks and metal balls, we can often ignore drag (see the second paragraph of this post). Up to now, we have ignored another force that opposes gravity – buoyancy (post 17.7). For an object of volume V and density ρ (see post 16.44), immersed in a fluid of density ρo, its effective weight is reduced from mg = Vρg to

So, when we include drag and buoyancy, the force acting on a falling object is

and the terminal velocity is given by

For most objects in a gas, like air, ρ is much greater than ρo, so buoyancy is negligible and our earlier equation for calculating v is an excellent approximation. However, for liquids, (1 – ρo/ρ) may not be negligible and we may need to use the equation above to get reliable results.

As explained in post 16.42, when we model things that happen in the physical world, we use the simplest model that we expect to give us reliable results.