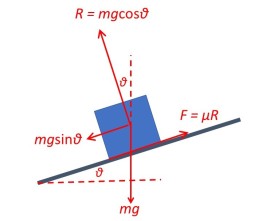 The picture above shows the forces acting on an object on a slope – like the vehicle on a road camber in post 17.34. If the object has a mass of m, gravity pulls it towards the centre of the earth with a force mg, where g is the magnitude of the earth’s gravitational field (post 16.16). If the angle of the slope is θ, the component (post 16.50) of the gravitational force pulling the object to the slope is mgcosθ (see also, post 17.34). According to Newton’s third law of motion, the slope pushes back with an equal and opposite force of mgcosθ (otherwise the object would sink into the ground) – this is the ground reaction force. Of course, if the ground is too soft to exert this force, the object sinks into it.

The gravitational force also has a component mgsinθ (post 16.50) that tends to make the object slide down the slope. So, why doesn’t the vehicle on the road camber slide? The explanation must be that friction opposes this sliding motion (post 16.19).

The fictional force, magnitude F, opposes motion and so must act up the slope. Its magnitude depends on the ground reaction force, mgsinθ, and the nature of the two surfaces in contact – their roughness and how easily they are deformed. A rough surface leads to higher friction (post 16.19) and a soft surface that is easily deformed will have its bumps smoothed out by a harder surface, leading to lower friction. We can express this result by writing

where R is the ground reaction force and μ is called the coefficient of friction; μ was first mentioned in post 16.20. There is no simple way of predicting the value of μ – we have to measure its value for different pairs of materials.

Let’s return to the object in the picture. Then

In the last step, I’ve used the coefficient of static friction because I’ve assumed that the object is not sliding down the slope.

We have seen that the object is being pulled down the slope by the component mgsinθ of the gravitational force. So, if the object doesn’t slide, the frictional force must be greater or equal in magnitude to the force pulling it down the slope. We can write this statement as

The sign > means “greater than or equal to”. If we divide both sides of this inequality by mgcosθ gives the result that

When we devide the cosine of an angle by its sine, we call the result the tangent of the angle (post 16.50). So, the inequality above is conventionally written as

So, if the coefficient of friction between the two contacting surfaces is greater than the tangent of the angle of the slope, the object will not slide.